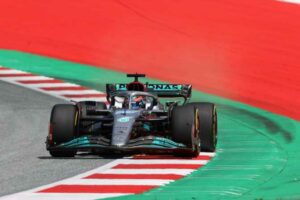 Here are the latest results from the critical qualifying session for the Austrian Grand Prix at the Red Bull Ring.

The qualifying session for the Austrian Grand Prix is underway, determining the grid for Saturday’s Sprint event.

At the end of Q2, Charles Leclerc has set the pace in both of the first two parts of qualifying. His closest competitor in Q2 was Red Bull’s Max Verstappen, with the reigning World Champion setting the fastest time of practice earlier on Friday.

AlphaTauri’s Pierre Gasly was fastest of those knocked out in Q2, as he placed in 11th, ahead of Williams’ Alex Albon. Valtteri Bottas was 13th, but is set to start Sunday’s race from the back as a result of a power unit grid penalty.

Yuki Tsunoda was 14th in the second AlphaTauri, while Lando Norris was knocked out in 15th after a troubled Q2 session in which he expressed a lack of confidence in his brakes and missed out on setting a representative laptime.