Even Ferrari 'happy' to see Sebastian Vettel back on podium 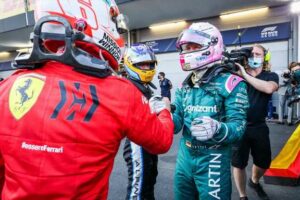 It is no secret that the relationship between Sebastian Vettel and Ferrari broke down, but his former employers were happy to see him finish P2 in Baku.

Ferrari let the four-time World Champion know before even a lap was raced in 2021 that his services would no longer be required at the Scuderia following the conclusion of the 2020 season.

That led to a long, miserable divorce process for both parties, all in a campaign where Ferrari posted their worst finish in the Constructors’ Championship in four decades.

Ferrari team boss, Mattia Binotto, has on numerous occasions described Carlos Sainz’s arrival from McLaren as a “breath of fresh air” – but he did at least have something positive to say about Vettel after witnessing him finish ahead of both Ferrari drivers and on the podium in Baku.

“A special race for sure,” Binotto told Sky Italia. “We’re also happy for Seb [Vettel], a second place for him and it was a deserved second place.

“I think as Ferrari fans we’re happy for his result.”

Binotto, however, was not too happy about his own team’s result in Baku, even though they did fear they would struggle to keep Red Bull and Mercedes at bay from pole position.

Charles Leclerc had to settle for P4, while an uncharacteristically sloppy Sainz rescued P8 to ensure the Scuderia did move ahead of McLaren and into P3 in the Constructors’ Championship.

“Our race was not a good one,” Binotto concluded.

“We remain a bit disappointed. I believe that our pace, once we had a clear track, was not that bad – but we have to understand with the soft tyres, we knew we were a bit more in trouble in the first stint.

“We’ve been [in trouble] maybe a bit more than we should. Then we complicated our race via the drivers themselves.

“That being said, we did a great qualifying, two poles in a row and we gain the third place in the Constructors’ Championship, that we never had since the beginning of the season.

“So the direction is for sure the right one, and for sure there are positive aspects from this weekend.”