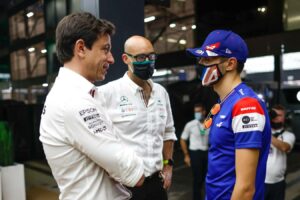 Esteban Ocon refuses to dwell on George Russell being given a Mercedes chance ahead of him, saying he is “very proud” of the route he has taken.

That pathway, of course, was to Renault, who are now branded Alpine, and Ocon enjoyed a second-place finish with them in the 2020 Sakhir Grand Prix before famously bagging his first F1 victory at the Hungaroring last year.

A Mercedes junior driver since 2015, Ocon is nearly a year-and-a-half older than Russell and has been connected to the German giants for longer than the Briton.

His first F1 racing opportunity came in 2016 with Manor, after which he joined Force India/Racing Point for two seasons before being ousted in favour of Lance Stroll following the team’s buyout by the Canadian driver’s father.

That meant a year on the sidelines for Ocon in 2019, but midway through that campaign there were rumours he could replace Valtteri Bottas at Mercedes for 2020.

However, that did not happen, Ocon signed for Renault and when Mercedes dispensed with Bottas’ services for 2022, they opted to promote Russell instead.

Asked during the Beyond the Grid podcast about how close he had been to partnering Lewis Hamilton at Mercedes, Ocon said: “I don’t know. I was very well looked after from James Vowles, from Toto [Wolff]. They were looking after me and trying to find solutions.

“Toto was quite clear, he said you will drive in 2020. It’s been quite a few times that when he spoke about something [it] actually happened. And it did happen again. Not at Mercedes but at Renault.

“What I know is I was very proud of my choice, in the end going to Renault to race with the team I grew up with at Enstone for so many years.

“Back in 2011, when I was still in go-karts, I was training at their facilities, just seeing the F1 drivers being there and dreaming of one day being one of the two drivers.

“I’ve joined that team and we have created many great memories, and we hope to create many more.”

In 2019, Ocon was the Mercedes reserve driver and that gave him a major insight into why the team had been so successful, last year completing eight consecutive Constructors’ title successes.

“What impressed me about that team is how much they knew the subject, basically,” said the 25-year-old Frenchman.

“And the dedication. How much work I put in was amazing. I’ve never done that many laps in the simulator before a race weekend. We were doing like 230 laps of the Red Bull Ring before the weekend, from six in the evening to four in the morning, and then I was flying to the track.

“It was dedication and hard work, and it was paying off. And in all of the departments that’s how things were working.

“People would think it’s very robotic from the outside and they were seeing domination, clearly, but it was not like that at all. There was a lot of debate, a lot of question marks.

“When there was a failure, people were actually thinking ‘oh, we need to change this thing to make it work’. It was not straightforward and you go and win races, not at all.

“But yeah, just very impressed of how well the subject was executed.”