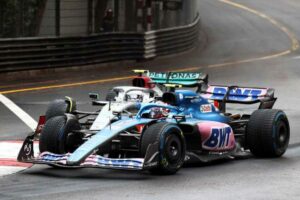 Esteban Ocon felt his five-second penalty that cost him points at the Monaco Grand Prix had been unjust.

The Alpine driver finished ninth on the road but after his penalty had been applied to the final standings, he dropped to 12th behind Valtteri Bottas, Sebastian Vettel and Pierre Gasly.

The reason for the penalty was a collision with Lewis Hamilton at Sainte Devote on lap 18. Hamilton in the Mercedes was catching Ocon fast, having just stopped for intermediate tyres on a track beginning to dry out following a delayed start due to heavy rain.

The seven-time former World Champion went for a move up the inside of Ocon, who was adjudged by the stewards to have closed the door unfairly in keeping him behind as the duo made contact.

Hamilton sustained damage to his front wing, which was able to be replaced during a red-flag stoppage following a Mick Schumacher crash. Later, the duo found themselves racing again as the Briton found himself, in eighth place, sandwiched between the two Alpines.

🏁 CHEQUERED FLAG 🏁 in Monaco 🇲🇨 Fernando crosses the line in P7 👏👏👏 Esteban finishes P9, but a 5-second penalty pushes him outside of the points.

Ocon said in an interview with Sky F1 after the race that the stewards had informed the team the penalty had been issued due to a change in the rules implemented for this year.

Asked if he had suffered from a lack of pace, Ocon said: “No, I think we did everything right in general. We were racing well until we got that five-second penalty, which is still really unjustified unfortunately.

“So I’m very frustrated with that because it ruined our result, but that’s how it is. Went to review with the students and they said if this was last year, it would have been a racing incident so I don’t know what has really changed this year.”

Asked for any specifics, Ocon added: “Not sure. If you want to overtake in Monaco, there has to be some kind of contact because there’s no space to do so.

“It was fair racing, a bit of contact for sure. But we didn’t suffer, any of us, so it’s very disappointing and I’m pretty frustrated.”

Ocon’s team-mate, Fernando Alonso, finished seventh having put on a defensive display in the closing stages to preserve his tyres – which worked as the Spaniard managed to increase his season’s points tally to 10.