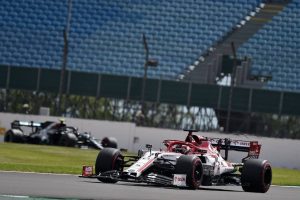 Esteban Ocon has avoided a penalty for interfering with a Kimi Raikkonen hot lap during Q1 for the British Grand Prix.

Raikkonen did not make it through to Q2, setting only the 18th fastest time, although he will rise two positions on the grid due to Daniil Kvyat’s penalty for a gearbox change and George Russell’s demotion for ignoring yellow flags.

But there was no punishment for Ocon after the stewards looked into whether the Renault driver had blocked his Alfa Romeo rival at Silverstone’s Club turn.

The Finn launched a four-letter tirade over the team radio after the incident, saying he had “lost the throttle completely” as Ocon slowed down ahead of him.

But after hearing from both drivers, the stewards ruled that while Raikkonen may have suffered an aerodynamic disadvantage because of his proximity to the Renault driver, it was not sufficient to be considered impeding.

Let’s regroup and do our best to put up a fight tomorrow. ?? #BritishGP ?? pic.twitter.com/KNmjIWXZAh

“Towards the end of Q1, entering the final complex of turns, Raikkonen’s car was rapidly closing with Ocon,” the stewards explained.

“In the hearing, Raikkonen stated that because of the position of Ocon’s car through turn 17 to turn 18, his aero was affected negatively and that he was impeded.

“Ocon stated that he was advised of the position of Raikkonen by his team, and prior to entering turn 16 looked at the relative position. He felt there was a significant gap. He then accelerated through turn 17 to start his lap. Raikkonen felt that by failing to accelerate early enough, Ocon impeded him.

“The stewards reviewed the video and while they accept Raikkonen’s aero may have been affected in his lap, the cars were never close enough, especially compared to previous cases, to constitute ‘unnecessary impeding’ which is the text of the regulation.”

It was a frustrating day for Raikkonen, who also had a run-in with his team-mate Antonio Giovinazzi during FP3, as Alfa Romeo continue to find themselves among the backmarkers due to their lack of pace.

“We have things to improve obviously, but there are cars with the same engine ahead of us so you can’t just say it’s the engine,” said Raikkonen.

“Generally the car is a bit stronger this weekend. We got blocked in the last corner on the last try but the end result wouldn’t be massively different, so it’s not great.”

In other stewards’ decisions, Ferrari and Racing Point were cleared of unsafe releases from their garages for Charles Leclerc and Lance Stroll respectively.