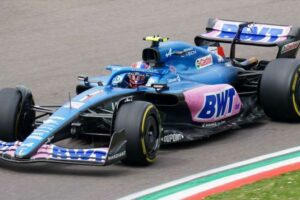 Alpine had the chance to gather 124 more laps of data early in this new era of Formula 1 through a tyre test at Imola.

Formula 1’s tyre manufacturer Pirelli have 25 days of testing available to them during the 2022 season when they will work with the teams to test their prototype tyres for the 2023 campaign.

At Imola, following the Emilia Romagna Grand Prix, Esteban Ocon was in action for Alpine, driving the A522 on Tuesday for Pirelli tyre testing duties.

Over the day, the Frenchman pumped in 124 laps, which he explained at this stage represents precious extra track time to understand these new cars.

With only four races gone in the 2022 season, teams and drivers are still at the very early stages of understanding and optimising the new ground-effect challengers.

Test day ✔️ 124 laps in the bag. Lots learnt, now back to the [email protected] pic.twitter.com/XoGkE30x34

“So job done today, we just finished the Pirelli tyre test for us at Imola,” said Ocon in a video on Alpine’s Twitter channel.

“124 laps, trouble-free day, a lot understood and more practice for us early in the season, which is quite important.”

With the 2022 Emilia Romagna Grand Prix now in the history books, a race that saw neither Ocon nor Fernando Alonso score points, the French outfit will be hoping luck and reliability are back on their side at the upcoming first ever Miami Grand Prix.

As part of Formula 1’s continued expansion in the United States, the Miami Grand Prix, at the Miami International Autodrome, will be the first of two United States-based races on the 2022 calendar.

From 2023 that is set to grow to three, when the Miami GP and United States GP are joined by the Las Vegas Grand Prix.

But before Ocon can put full focus into the trip to Miami, he has some simulator work to complete in the UK with Alpine first.

“We are looking forward to go to Miami now,” he said.

“I would be in the UK for the next two days and in the sim on Thursday, so a lot of work, but all gone well.”