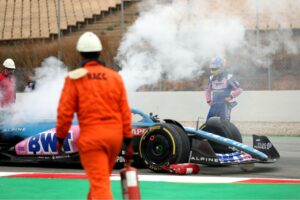 It would be safe to say Fernando Alonso’s start to the final day of running in Barcelona was not part of El Plan.

Only 47 minutes into the third and final morning, and the last session on a dry track before it is artificially watered for afternoon wet-tyre testing, Alonso brought out the red flags.

There had already been a ‘moment’ for the Alpine driver when he ran wide into the gravel, but worse was to come for the two-time former World Champion.

His team reported on social media he had asked to “stop the car at Turn 13 due to a loss of pressure” and that was where he ground to a halt as the session was stopped at the Circuit de Catalunya.

Smoke was seen billowing from the A522, which had been on a long run on the C3 medium tyres and had clocked the fastest time of the morning just a few minutes earlier.

The session was stopped for around 18 minutes while the Alpine was brought back to the pits under wraps on a trailer, with the 40-year-old Spaniard having looked pretty disconsolate as marshals performed extinguishing duties on the car and he then hitched a ride back to the paddock.

“The car has been recovered to the garage where we will investigate the issue further,” said an Alpine spokesperson.

Although Alpine had not been near the top of the timesheets on the first two days of the test, their car had been running reliably before the gremlins kicked in on Friday.

Alonso had completed 129 laps on day one and his team-mate Esteban Ocon turned in 125 on Thursday.

Sporting director Alan Permane said of Ocon’s running: “It was another solid day when we spent the morning doing some set-up work and understanding more about the car, learning of course on every run.

“In the afternoon, we ran a race simulation which went well. The car ran reliably and we had one small stoppage for a bracket on the floor of the car that had broken which we had to replace.

“Aside from that, the new power unit and the chassis ran faultlessly.”

Ocon added: “It was good to start to get a feeling for the car on proper tyres in accurate testing conditions. The most important target for us, like yesterday too, was to do lots of running, so to do over 100 laps is encouraging.

“We tested a lot of different things and we’ve given ourselves a couple of ideas to work on.

“We definitely have a direction on the particular areas to improve, which is the main objective at pre-season testing. It’s a positive start.”