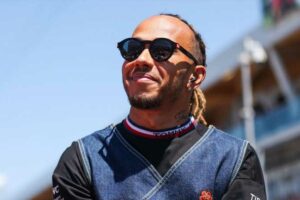 An “ecstatic” Lewis Hamilton said his podium finish in the Canadian Grand Prix had felt as good as a win given the context.

After a strong qualifying performance, the seven-time former World Champion started P4 in Montreal and was able to improve on that as Fernando Alonso slipped down the field.

Thankfully for Hamilton’s back, it seemed the porpoising issues significantly decreased with the W13 showing much quicker pace.

But the car was still well behind the Ferrari of Carlos Sainz and Red Bull of Max Verstappen – however, a late Safety Car caused by Yuki Tsunoda put the front-runners in Hamilton’s view once more.

They quickly sped away again but Hamilton was able to take inspiration from the pace differential between the leaders and the Mercedes being much smaller than it has been so far in the season.

Speaking after he had secured his first podium since Bahrain, Hamilton described it as “overwhelming.”

“To be working and working, working and not always seeing progress,” he told Sky Sports F1. “It’s been such a difficult year for me personally in the car. Qualifying yesterday was emotional for me, back in the garage we were like ‘wow, this is beautiful for us’.

🎙 “Great effort guys. Thank you so much. Car was a little better today. We’ve really got something here. Let’s keep pushing.” pic.twitter.com/PAhSZ8eAXd

“We’ve been working so hard and then to have a strong race today just gives me so much hope and confidence that we can move forward. There is potential in this car, it’s not currently where we want it to be but it’s just got a really small working window. If you don’t get it perfect, it’s all over the place. That’s the really hard thing to navigate through.”

In his immediate post-race interview, Hamilton said he was “ecstatic” and went on to describe the result as feeling like a win in his mind.

“Obviously it’s different to a win but I think it feels as good as that in a sense,” he said. “I’ve had a fourth and a third and a bit of consistency is coming back finally, so I’m definitely grateful and I know we can do better and I can do more.”

For the last 10 laps of the race, Hamilton was at least in the same shot as Sainz and Verstappen which will give the team encouragement moving forward.

“I could just about see him [Sainz] in the end, thanks to the Safety Car, but honestly our pace was quite good, particularly in the second phase of the stint,” he added.

“We did a lot of work back in the simulator but also here to get the set-up right. Honestly, I’m ecstatic. As I said, I didn’t expect this coming into the weekend.

“It’s my second podium of the year and so this feels really special, especially where I got my first grand prix win.”