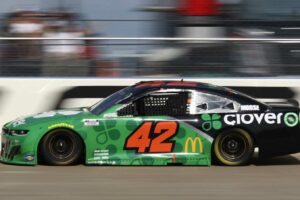 Justin Haley of Spire Motorsports was one of several contenders to suffer brake rotor failures at the new Cup venue and the debris was run over by the Roush Fenway Racing No. 17. The damage sent Buescher into the wall and into a renewed playoff battle.

Buescher entered the race 60 points ahead of the playoff cutoff and his misfortune brought the likes of Matt DiBenedetto, Kurt Busch, Ricky Stenhouse and Ross Chastain back into the mix.

It has been a slow start for both Chip Ganassi Racing teams — but especially Chastain in his first season driving the No. 42 and paired with Phil Surgen. His best runs in recent weeks have come on road courses at Austin and Sonoma, but his runner-up on Sunday was his first on an oval since the Daytona 500.

Chastain took it a step further on pit road after the race.

“Finally, on a regular old circle track,” Chastain said. “That’s where I’m at right now. I’m happy about the road courses, and I don’t know why that’s happening, but here I know why and what we did and what I’m doing to drive the car…”

Well, kind of. When asked if this has any significance for the future, Chastain conceded that he wasn’t totally sure.

“I’m not the set-up guy,” Chastain said. “I’ll let Phil Surgen and the set-up boys and girls handle that and I’m going to put all the work in to do the best job I can behind the wheel.”

Regardless, Chastain has a puncher’s shot at making the field of 16 at 50 points back with his runner-up in the outskirts of Music City USA.

Busch and Stenhouse both ran inside the top-10 throughout the race and gained 39 points on Buescher between their finish and the stage points.

Like Chastain, it has been a rough go at times for Busch too, who finished eight and left Nashville pleased.

“We were trying to save some fuel at the end and lost the race for a top-five,” Busch said. “Awesome day for Chastain. He pitted and got to run hard at the end. I was hoping he would catch Larson; that would have been incredible.”

Stenhouse opened the first half of the regular season with six top-10s and was 13th in the standings after the eighth race at Martinsville. Since, then it’s been a struggle to make the top-20. His sixth-place finish on Sunday was his first top-10 since his runner-up in the Bristol Dirt Race.

“We can still make a run,” Stenhouse said concerning the points. “We got to have some help like this where we have good days and they have bad days. I feel like we’ve given up quite a few raced and points. We’re going to keep pressing along and keep running consistent.

And no, he doesn’t feel like he needs to go out there and win Daytona in the regular season finale to make it happen.

“You’re never in must win mode until you’re actually in must-win mode, right?”

Of course, a surprise winner between now and Daytona could push everyone into must-win mode.