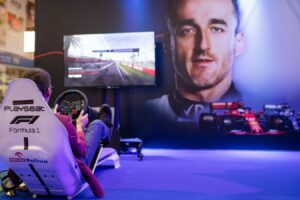 Video gamers can try their hand at the new generation of cars when F1 2022 is launched by EA Sports on July 1.

The makers of the game have announced that as well as the introduction of the Miami Grand Prix, which takes place for the first time on May 8, a redefined race day experience can be enjoyed in terms of the broadcasting, formation lap, Safety Car and pit-stop features.

Updates to the circuits in Australia, Spain and Abu Dhabi have also been incorporated, further enhancing the true-to-life experience of virtually driving the cars that have been designed for the new era of Formula 1 regulations.

Another new aspect is F1 Life, a customisable hub in which players can show off their collection of supercars, clothing and accessories earned via gameplay, Podium Pass and the in-game brand store.

Enter the new era with #F122game

“We look forward to welcoming our players to the new era of Formula 1,” said Lee Mather, F1 Senior Creative Director at Codemasters, the company which had been the sole developer of the F1 game since 2009 until last year when they merged with Electronic Arts.

“Alongside the real-world changes, we have updated the physics to accommodate the new aero rules and re-worked the tyre model, making the handling more true to life.

“With new and updated circuits, Adaptive AI, F1 Life and expanded gameplay options, there has never been a better time for players to take their seats and live the life of an F1 driver.”

Select Immersive and players will face risk-reward challenges that could be the difference between a place on the podium or finishing outside the points. Broadcast takes the pressure off, with controlled and authentic cinematics that keeps players close to the action.

It also features its critically acclaimed 10-year Career, complete with a two-player option, and Multiplayer is back for epic races against the global racing community.