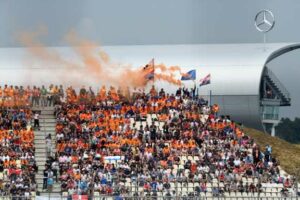 Dutch Grand Prix director Jan Lammers has called for fans from his country to show Lewis Hamilton respect when the race takes place next month.

It is fair to say Hamilton is not the most popular driver in the Netherlands this season with him locked in a title fight with Max Verstappen.

That became the case more so than ever after the British Grand Prix, in which the Dutchman crashed out after the two came together on the opening lap while the Briton went on to win.

The Mercedes driver was booed by a crowd full of Dutch fans at the next race in Hungary.

Lammers has urged his countrymen not to do the same at Zandvoort.

“Sport should unite people and we should not get hooligan situations like in football,” he told nu.nl.

“It’s also emotion – you don’t turn an Ajax fan into a Feyenoord fan and vice versa. It’s logical that everyone has their own preferences, but let’s deal with it in a civilised way. In such a way that we surprise Hamilton with our sportsmanship and hospitality.

“We are talking about a seven-time World Champion who can be compared to a Lionel Messi or Cristiano Ronaldo.

“You have to welcome them to the stadium with a big round of applause and not judge them on one incident.”

Get a glimpse of the progress of the construction works at https://t.co/THo6f7tS36 Circuit Zandvoort 👀

The Dutch Grand Prix was intended to return to the sport last season but was ultimately cancelled as a result of the pandemic.

This year, it is set to go ahead in front of capacity crowds, and Lammers is confident another cancellation is not on the horizon with the number of COVID-19 cases in the nation steadily dropping.

“Thanks to the measures taken by the government, we are looking forward to the grand prix with confidence,” he added.

“We hope and expect that sports events will take place from September 1 as we are used to. We are not worried. It is a matter of tackling it and having confidence.

“There is constant consultation and contact with the government. It is in mutual interest because the government is also very proud and enthusiastic about the grand prix, but it must be possible.

“Everyone has to conform to the corona figures and they are going in the right direction.”