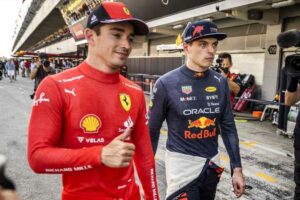 Verstappen was on provisional pole in Barcelona, rival Charles Leclerc suffering a spin on his first flying lap, but the tables would soon turn.

Leclerc delivered a stonking lap on his second attempt to strike back, but Verstappen was robbed of the chance to respond, complaining of a loss of power as Red Bull called him back into the pits.

Horner revealed that it was an issue with the DRS which had impacted Verstappen, though doubted that there was a time in the RB18 which could have threatened Leclerc.

“It wasn’t actually power in the end, it was the DRS that didn’t open,” Horner revealed to Sky F1.

“So obviously need to get the car back to understand what’s caused that, because it opened on the back straight just as a check on his way back into the pits.

“I don’t think we had enough today to beat that lap of Charles, a great lap by him under pressure at the end, but I’m still pleased with a front-row start.”

Sharing the front row for the fourth time in 2022 🤝 #SpanishGP 🇪🇸 pic.twitter.com/gax4AzOJVQ

Reliability has undoubtedly been Red Bull’s Achilles’ heel in these early stages of the 2022 campaign, but while such problems have seemed to hit Red Bull at the worst of times, Horner pointed out that Ferrari also have had issues in Spain.

The Scuderia were forced to change Sainz’s chassis on Friday night due to a fuel system issue.

“These things are tending to happen, we saw Ferrari change the chassis last night because of a fuel system issue,” said Horner.

“Unfortunately they’ve hit us at inconvenient times, the last time you want it is on the last run in Q3.

“But as a team we work hard, we try and understand what the issue is, it may be as simple as a piece of rubber’s got stuck in the mechanism.

Looking ahead to the race, Horner pointed out that Leclerc has an extra set of new soft tyres available to him, an “interesting” piece of strategy for a race which Horner believes will be dominated by tyre degradation.

Asked if the race was the focus for Red Bull, considering the high temperatures, Horner replied: “We’ll see tomorrow.

“Charles has carried a new set of the soft tyres into the race tomorrow, so that’s strategically quite interesting.

“But these temperatures, it’s all going to be about tyre deg and tyre management, so it’s going to be a fascinating race.”

Leclerc had expressed concern regarding Ferrari’s performance on long runs, tyre wear having cost him in Imola and Miami.

Nonetheless, Horner is expecting another very close battle between his team and Ferrari on Sunday.

“This morning they had a long run with both of their cars, because they were obviously concerned overnight, so they’ve obviously made set-up changes,” said Horner of Ferrari.

“And they didn’t look too bad, so I think again we are very, very evenly matched and I think it’s going to be a very close race tomorrow.”

Sergio Perez starts P5 in the other Red Bull, Horner explaining that Sector 1 was where the Mexican lost out.

Horner still expects Perez to be a factor though in the race starting from that position.

“I think it was just Sector 1 really,” said Horner when asked where Perez had struggled.

“I think Checo didn’t quite nail Sector 1, Sector 2 Sector 3 he was pretty much there, if you look at his theoreticals he was fourth-quickest.

“So it’s just such fine margins, but he’ll race okay from there.”