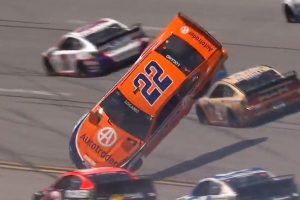 Joey Logano is happy to be alive.
Ryan Newman too.

NASCAR continues to chase a delicate balance between entertainment and the risk of placing competitors in serious harm during the races at both Daytona International Speedway and Talladega Superspeedway.

That balance was once again compromised on Sunday during the GEICO 500 when Logano went airborne and rolled over during a crash on the final lap of the first stage.

Running third, Logano was hit from behind by Denny Hamlin after Hamlin himself was struck by Ricky Stenhouse Jr. The contact turned Logano sideways and his car went airborne in front of the field. The Team Penske No. 22 flipped upside down and skated off its roof before flipping back over and sliding into the grass.

There was initially some hope that his car could continue but Logano told his team the roof of his Ford Mustang was pressing against his helmet from the impact. He climbed out of the car and was transported to the infield care center.

Logano was evaluated and released without injury but issued serious concerns about this style of racing moving forward.

“I guess I don’t know exactly what to think,” Logano told said on the television broadcast. “It is a product of this racing. On one hand, I am so proud to drive a Cup car that is safe, and that I can go through a crash like that and get out and speak about it. On one hand, I am made about being in the crash and on the other, I am happy to be alive.

“On another hand, I am wondering when we are going to stop because this is dangerous doing what we are doing. I got a roll bar in my head. That is not okay. I am one hit away from the same situation Ryan Newman just went through. I just don’t feel like that is acceptable.”

Newman of course rolled over during the 2020 Daytona 500 but was struck by an oncoming Corey Lajoie. The secondary contact knocked Newman unconscious and resulted in a brain contusion. Newman spent over two days in an area hospital but has repeatedly expressed relief that the crash didn’t kill him.

Following an extensive investigation during the COVID-19 shutdown, NASCAR made several changes to the superspeedway rules package before the June race at Talladega last spring.

The Daytona 500 featured two major multi-car crashes — including one on the final lap where several drivers (including Logano) were engulfed in a giant explosion.

“A lot of it is the big spoiler and the big runs and all the pushing,” Logano said. “It is nobody’s fault. Denny (Hamlin) is trying to go and (Stenhouse) is trying to go. It is a product of this racing. We have to fix it though. Someone already got hurt and we are still doing it, so that’s not real smart.

“At the same time, I am appreciative of driving a car that is this safe and what Team Penske has done for the safety of these cars so that I can live to talk about it and go again. I got lucky that I didn’t get hit while I was in the air.”

Which is, of course, what happened to Newman.

After winning the race and being made aware of the crash involving his Penske teammate, Brad Keselowski said NASCAR has to ‘no doubt keep these cars on the ground,’ with future rules packages or the upcoming Next-Gen car.

“I don’t care what the rules package is, we’ll start there, we have to keep the cars on the ground,” Keselowski said. “We’re pretty good drivers, but none of that stuff works when we’re in the air. Gas pedal, brakes, shifter — they’re not rudders.

“It’s not a jet propulsion system, so what comes up, must come down, and it’s going to land wherever it wants to. It’s not a jet-propelled vehicle so we have to keep it them on the ground.”

Newman, for his part, says it’s just the evolution of this kind of racing.

“So, the racing has changed, and it’s changed for a reason. The tires are still black, and round and the car still makes 500 plus horsepower, but the aero rules have changed, and they’ve changed the way we collectively race together.”

Newman says that there comes a point in every race where ‘the stupidity comes out’ and the aggression meter gets pegged.

Everyone agrees that superspeedway racing is amongst the most compelling products in motorsports, and it’s an assumed risk four times a year, but William Byron says speeds could probably be further reduced and still generate a similar experience for fans.

“I think they could take another three to four miles per hour off,” Byron said. “I don’t know how they do that, but I feel like this package is generally pretty good. I wasn’t a huge fan of when I first came to Cup, we had this big bubble effect, and guys could control a lane and the race the whole time. That was boring.”

That was the conundrum and NASCAR is constantly making tweaks so that drivers can overcome the detriments of dirty air. Typically, the response to a lackluster package is the transition to a more dangerous one, and another correction that intends to strike a balance.

“I feel like now we have the ability to push through that bubble,” Byron said. “It’s now about the runs, and how you get that push, and how you take pushes and be the pusher. … I still feel like they can slow the car three or four miles per hours.

“They did that after (last year’s Daytona 500) and the teams got it right back, so they can probably take more away from us again, going 195 around here instead of 199.”

The Next-Gen car will debut in February for Daytona Speedweeks and this process will begin anew. Team Penske competition director Travis Geisler says NASCAR has emphasized takeoff speed in its R&D.

“There’s also some other challenges with that car being a sealed underbody, probably a little more likely to (roll over), but I think they’re making a great effort towards it,” Geisler said. “I can’t say I’ve really seen the data enough to say that we’re making an improvement or we’re in a worse position. I know there’s certainly been a lot of focus put on it.

“It is probably one of our more dangerous incidents. Obviously, Newman kind of highlighted that. We got really fortunate today that Bubba was able to kind of avoid a major contact.”