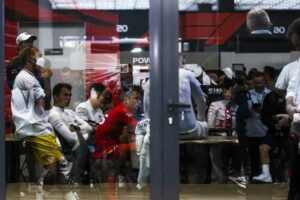 Kevin Magnussen says the drivers worked in “a united effort” in order to agree to race in Saudi Arabia following a missile strike.

The drivers met with F1 chiefs including CEO Stefano Domenicali for four hours following a missile strike at an oil refinery facility just 12 miles from the Jeddah Corniche Circuit.

Many drivers were reported to be unwilling to race before team principals joined the meeting, but Haas racer Magnussen said the decision to race was “a united effort”.

“It was great to see we could actually get together and talk about things and work together in a united effort,” said the Danish driver, as reported by the Independent.

“Obviously, [it was] not a nice situation and nobody felt comfortable, and everyone had fears and worries, so it was good to have that meeting.

“It was very long, but we learned a lot of things in that meeting and came out a little wiser.”

Hearing some drivers unsure about continuing with the weekend after the recent attack nearby #F1 #SaudiArabianGP pic.twitter.com/TmzUxBLpRo

Mercedes team principal Toto Wolff denied there had been any “arm-twisting” from the team bosses in order to get the drivers to race.

“There wasn’t any arm-twisting from our side,” said Wolff, as reported by gpfans.com.

“There were good discussions and when the team principals talked to the drivers I think what we talked was sense and not at all with any pressure, but maybe that was perceived in a different way.

“In the end, the show and the spectacle was amazing and what we delivered as a sport was great and I think this is what sport should do.”

Domenicali also denied F1 had chosen money over morality in the wake of their decision not to cancel the grand prix.

“Nobody can judge our morality, to be honest. It is a matter of putting in place all the things that have to be considered,” he told Sky Sports.

“Where is the line? That is the question. Our position, and it will always be, is we believe what we are doing will have a very positive impact in all the political situations for the best of our life and at all levels.

“This will always be the consideration we will take for our future in the sport, all over the world.”

Despite this, some drivers have shown hesitancy in wanting to return to Saudi Arabia with Lewis Hamilton saying he was “looking forward to getting out”.