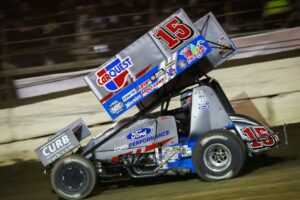 The legend of Donny Schatz very well could have been written in pavement rather than mud.

Now 43, the native of Wilmot, North Dakota had already established himself as a regular on the World of Outlaws Sprint Car Series with rookie of the year honors in 1997 and his first feature victory in 1998 when he was approached with an ABC Deal to pursue NASCAR.

Had Schatz pursued it, he would have made his pavement stock car debut in the World Series of Asphalt at New Smyrna Raceway and competed in the ARCA Racing Series before making the gradual progression into the Busch Grand National division and Winston Cup.

That partnership would have come with R.E. Technologies/Curb-Agajanian Racing.

He spent a few days in Charlotte mulling the opportunity before ultimately deciding to stay the course in World of Outlaws.

“It wasn’t me,” Schatz said. “As a kid, I grew up wanting to race Sprint Cars with the world of Outlaws. My heroes were Steve Kinser and Sammy Swindell, Mark Kinser and Dave Blaney.

“You know, I’d seen Steve go down that path, and Sammy too, and after spending a lot of time around it, I just decided that it wasn’t the right fit for me.”

Schatz had spent over a decade preparing himself to be an Outlaw and would have needed to start over in his early 20s.

“And I would have felt like it was walking away from this dream I’d always had,” Schatz said. “I was racing with the Outlaws and wasn’t as competitive as I wanted to be. I was already so focused on reaching that level that I just shut the door on NASCAR.”

That determination paid off.

At the same time Jimmie Johnson began his decade of dominance in the Cup Series, Schatz clicked off four consecutive championships from 2006-2009, adding another in 2012 and five straight from 2014-2018.

He has 10 victories in the prestigious Knoxville Nationals, five in the Williams Grove National Open and two in the Kings Royal.

If there was literally such a thing, he’d be on the Sprint Car Mount Rushmore. When it comes to the decision to stay in Sprint Cars over Stock Cars, the right decision was made, and there was never any turning back.

“It’s not a decision I regret,” Schatz said. “Obviously, there have been some incredible NASCAR guys that have come from our background — Jeff Gordon and Tony Stewart.

“Could that have been me? We’ll never know. I never asked myself that, but I know I made the right career choice because at 43, I still love what I do.”

And yet, Schatz will get his turn in the NASCAR spotlight at least once while he remains in his prime. With NASCAR embracing dirt at the highest levels and a World of Outlaws off day on July 9, Schatz will make his debut in the Truck Series with David Gilliland Racing at Knoxville Raceway.

“The sticky part on whether or not to make this all work or not is … you all know my commitment to the World of Outlaws, and it has been for 25 years. That’s a pretty tough schedule to try and fit something like this in. Without this July 9 date, we wouldn’t be racing.”

Even though Schatz is totally content with his place in the overall motorsport hierarchy, he has been made keenly aware that his NASCAR debut is something of a big deal for both disciplines.

Like the event itself, Schatz is a bridge that connects dirt and NASCAR fans alike, especially considering that he has driven for Tony Stewart Racing since 2008.

“It’s crazy to think of the hype,” Schatz said. “My phone has been burning up for 24 hours. I’m hearing from people I haven’t heard from in 20 years. They’re super excited. Even the fans that maybe aren’t fans of mine or they don’t want to think they’re fans of mine are, I think, going to have eyes on this event at Knoxville.”

Schatz will be joined by fellow Sprint Car veteran Brian Brown at Knoxville but doesn’t inherently believe they have a natural advantage having raced at the Sprint Car Capitol of the World. After all, the Truck Series regulars have already raced on dirt this season at Bristol Motor Speedway and that race was won by Cup Series champion Martin Truex Jr. — making his first professional appearance on dirt.

“I think it’s impossible to set any expectations until we’re able to get on the race track on July 8 and make some laps,” Schatz said. “If I’m able to adapt quickly and be competitive time-wise and we’re able to have some feedback and communication as to what I need to do to be able to make 100 laps with the changing surface and the tires wearing and all those things.

“I think it’s really not accurate of me to even say, yeah I’m looking for a top-five or a top-10. It’s just ultimately impossible to answer that until I physically see what it’s like when you first get in it. …

“I think ultimately it’s going to be having this great opportunity, you’ve got to make the best of it. Ultimately in racing every day we try to have the most amount of fun and I’m going to have fun even if it’s a bad day.”

There’s been a lot of fun for Schatz over the years, who is an example of a great race car driver who chose dirt over stock cars and still became an international star. He’s earned countless millions during his two decades of dominance and even owns his own private plane.

Schatz is living the dream, but more importantly, it’s his grassroots and clay covered dream.

“I enjoy what I do and would I love to race for even more money, sure,” Schatz conceded, “but I love the little things that come along with our schedule.

“I love that I can take a guy who dreamed of working on these cars and see their face when you take them to the Knoxville Nationals or their first Outlaws show.

“Brad Sweet, who won the past two championships, their crew chief (Eric Prutzman) stayed over last night and I look at him with a tremendous amount of pride because he’s been with me at various points of my journey. He won his first Nationals with us.”

Schatz has made a lot of money, but what more money he could have made in NASCAR wouldn’t have been worth the friendships and experiences he’s made along the way.

“So, with all due respect to them, I still think what I do is far better than what any NASCAR driver does,” Schatz said. “We race 85 times a year with the most passionate fan base imaginable, and I feel like it gets us in touch with way more people at the end of the day. I’m just proud of all of that.”