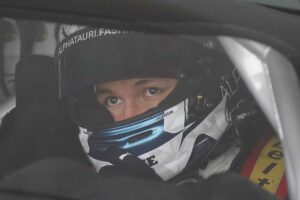 Predicting silly season and the comings and goings of Formula 1 drivers in any offseason is never an exact science.

This coming offseason, expect to hear a familiar name in the discussion, as Alex Albon insists he has not given up on Formula 1. After finishing seventh in the Formula 1 championship as Max Verstappen’s Red Bull teammate last year, the 25-year-old Albon was not only replaced by Sergio Perez but relegated to the German DTM sports-car series for 2021.

After Perez won at Baku, the Mexican thanked British-born Thai Albon for his contribution behind the scenes.

“Alex is putting so much work into the simulator and with the engineers,” Perez said. “When I came here, I didn’t expect him to be so open but he explained to me how the car works.”

Albon says he appreciated Perez’s words, but insisted his contribution is “just part of my job.”

“I don’t require any special recognition, because I know what my role in the team is,” Albon told European media outlet La Gazzetta dello Sport. “But what I am doing is important and I understand that. I love what I do, and I give it 110 percent every day. If I didn’t do that, I would not have a chance to return.”

Albon’s DTM season kicked off at Monza last weekend, and he finished the two races fourth and seventh. He sits fifth in the championship standings.

“Driving a GT3 car is fun, although it has a lot less downforce and grip than I’m used to,” Albon told the Italian daily. “But overall, my impression isn’t bad. It’s clear that even with my experience I feel like a rookie in this series, where I’m competing with drivers who have been in GT for a long time. But it’s no secret that my goal is to return to Formula 1. Obviously I want to win in everything I do, and this is no exception.

“But although my life has changed, I have not parted with Red Bull and I still participate actively in everything that happens in Milton Keynes and at the circuits. I’m doing everything in my power to return to Formula 1. I have the opportunity this year to quietly observe what is happening from the side, which I think will be very useful to me if I get the opportunity to come back.”