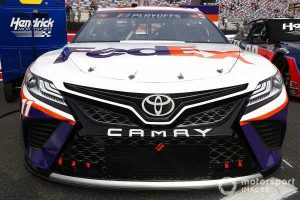 After a tough first round of the NASCAR Cup Series playoffs, Denny Hamlin was looking for better luck at Las Vegas.

He found some but could have used a little more.

Hamlin clearly had the best car in Sunday night’s South Point 400 at Las Vegas Motor Speedway, leading 121 of the 268 laps but an untimely caution during a late-round of green-flag pit stops turned the race upside down.

At first, it looked like Hamlin could be in for another rough night – initially getting caught a lap down – but he and his No. 11 Joe Gibbs Racing Toyota team rallied in overtime to come away with a third-place finish.

“We had a dominant car today and I’m proud of the whole team for giving me such a great car. By far the best car I’ve had in Las Vegas in a long time. It was really, really good,” Hamlin said.

“Really encouraged by the way we ran, but very disappointed that we didn’t get a win. It’s just been the way that the playoffs have gone. Whoever stays out the longest (during green-flag stops) puts themselves in a great spot to win.”

Hamlin, who didn’t finish better than 12th in the three first-round races, was never in danger of not advancing to the second round due to the bonus points he’s collected during the regular season.

After his finish Sunday, he has a 58-point cushion above the cutoff heading into next weekend’s race at Talladega. The final race of the second round is in two weeks at the Charlotte Roval.

While Hamlin has six wins this year, he has yet to win a race in the playoffs.

On the final restart in overtime, Hamlin restarted in fourth but he had pit during the prior caution and had fresher tires than those in front of him, putting him in an excellent position to still take the win.

“It’s tough to try to figure out where to be (on the restarts). When my car is on the bottom, I’m faster than everyone, but when the train gets going up top and the draft gets going, you can’t overcome it,” Hamlin said.

“I was really happy with the push that I got. I don’t know if I would have done a different move or not. I just drove to the bottom there and I got all the way beside (DiBenedetto).

“It was just that nobody was on the bottom there to help us push and that was all she wrote.”