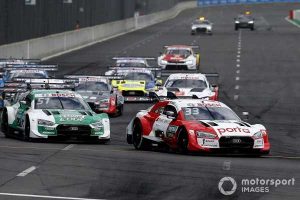 Former Mercedes motorsport chief Norbert Haug has described the impending demise of a manufacturer-based DTM as “terrible”, as the series prepares for its move to privateer-run, GT3-based cars in 2021.

The DTM is set to abandon its Class One ruleset to adopt beefed-up GT3 cars next year, as revealed by Motorsport.com this month, although some elements like the push-to-pass system will be retained after the switchover to ‘GT Plus’ regulations.

These changes are part of a major overhaul that will see the DTM move away from a manufacturer-centric formula in favour of a series where independent teams raise their own budgets from sponsorship income.

Series promoter ITR has been forced to make these changes in the wake of R-Motorsport Aston Martin and Audi’s withdrawal from the DTM, although the Ingolstadt-based manufacturer may remain in the series through its privateer teams next year.

Mercedes was also a part of the DTM during both its classic and modern era, but quit the series after the 2018 season to race in the all-electric Formula E series while maintaining Formula 1 as its primary combustion engine-based programme.

Asked how he felt about the DTM losing the silhouette cars that have formed the core of its regulations since its revival in 2000, Haug who stepped down from his Mercedes role in 2012, told F1-Insider: “It’s terrible, although the manufacturers can certainly justify [leaving the DTM], for motorsport as a whole, for all the framework series, for the youngsters who have always found a home and motivating training ground in the DTM.

“Whether it’s [Lewis] Hamilton, [Nico] Rosberg, [Valtteri] Bottas, [Sebastian] Vettel, [Charles] Leclerc, [Max] Verstappen, [Nico] Hulkenberg – they all drove in the DTM supporting programme [in European Formula 3], as well as around two-thirds of the current Formula 1 field, and each of these drivers knows where Oschersleben is.

“The DTM has always been a motorsports format that is appreciated worldwide and has always had much more to offer to spectators on site or in the media than just humming.

“The DTM has always been much more than a racing series. It was a concept of quality, a reflected state of mind, and even Formula 1 drivers and representatives clicked their tongues when they spoke of the DTM with enthusiasm and admiration.

“Sad, but true: If you don’t have it anymore, you will realise what you had in the DTM.”

Ever since the idea of the DTM moving to GT3 cars has been mooted, there has been a debate about whether there is room for two German-based series running to similar rules.

Asked how he felt about DTM’s plans to race in 2021 with GT3 cars, Haug said: “Two parallel GT3 race series with the ADAC GT Masters and DTM would not be a good idea. But maybe there are developments that I am not aware of.”