Home » Racing » Daytona Champ Now Races to Save the Planet, One Tree at a Time

Daytona Champ Now Races to Save the Planet, One Tree at a Time 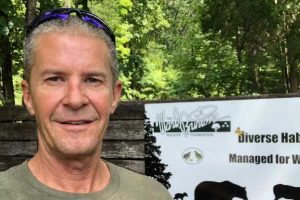 Ward Burton, the 2002 Daytona 500 champion, debates only briefly when asked what he might someday want on his headstone—that he was a winning NASCAR driver or a committed steward of the land?

“Racing was a career,” the Halifax, Va. native answers in his long-familiar drawl, still as thick as chilled honey. “Taking care of the land and the water and the air is a lifetime. Once I began racing and making a living, I had the means and the opportunity to do some good. Winning races gave me exposure to make a difference. The land is like a child… it can’t speak for itself, so I have to speak for it.”

The WBWF is more than just a hobby to keep Burton busy in his post-NASCAR days. Unlike some “foundation/charity” leaders, he puts his money where his mouth is, spending as much time in the woods as in his office. He is anything but an absentee figurehead leader. “The Foundation is really one of his babies,” says his wife, Tabitha. “He treats it like a family member. It’s everything to him. He works passionately and tirelessly to give the Foundation everything he has.”

Conservation of wildlife, forests, and wetlands is Burton’s underappreciated second career. The first—which offered the means and public recognition to pursue the second—began when he was a grade-school racer in southern Virginia. Following the path laid by so many other eventual stars, he progressed from go-karts to weekly short-track Late Models to the Xfinity Series to lower-level Cup rides to winning equipment with competitive Cup teams.

Burton’s Cup victories came during a nine-season run (1995-2003) in No. 22 Pontiacs and Dodges with team owners Bill and Gale Davis. Among the other drivers during their 20 years across NASCAR’s top three series: Jeremy Mayfield, Scott Wimmer, Dave Blaney, Bill Lester, Mike Skinner, Johnny Benson, A.J. Allmendinger, and Kenny Wallace. Former F-1 drivers Jacques Villeneuve and Scott Speed also raced for them, as did future Hall of Fame stars Bobby Labonte, Jeff Gordon, and Mark Martin. The Davises’ only victories in 722 Cup starts were from Burton.

With 26 combined victories, he and younger brother, Jeff (an NBC commentator and Hall of Fame nominee), are among nine siblings with Cup victories. The others: Bobby and Donnie Allison (94 combined), Darrell and Michael Waltrip (88), Kyle and Kurt Busch (87 and counting), Tim, Bob, and Fonty Flock (79), Herb and Donald Thomas (49), Terry and Bobby Labonte (43), Benny and Phil Parsons (22), and Geoffrey and Brett Bodine (19).

“I have no regrets, but I know in my heart I was capable of being more than I ever was in the cars I drove,” he says, speaking primarily of his bittersweet years with Bill Davis Racing. “I would have done more if I’d looked after my own interests rather than everybody else’s. I was loyal and honest and fair with everybody, but I was in cars that didn’t always have the resources and personnel to be competitive on a regular basis.

“I have no regrets, but I know in my heart I was capable of being more …”

“As a competitor, you should be able to look forward to going to the race track and doing well. But I knew that what we had regarding personnel and resources would put us against a big wall. There were a number of times we had races won, but never got to the finish. I’d make a mistake or we’d blow up or I’d come in leading (to pit) and come out fifth or sixth or the rain would get us. I can’t tell you the number of times we should have won but didn’t.”

If led in that direction, Burton would talk racing all day. His 28-year-old son, Jeb, is a part-time Xfinity driver who recently finished a career-best second at Richmond for JR Motorsports. Jeb’s cousin, 20-year-old Harrison (Jeff’s son), finished fourth for Joe Gibbs Racing in that same race. Ward feels that Jeb is better than either he or Jeff ever was, but frets that bringing sponsorship money is more important than bringing talent to a team.

But nowadays, he’d rather talk about his time in the woods and along lakes and rivers, trying to preserve and enhance what nature has given us. His foundation’s stewardship goal is to manage 7,000-plus acres of woodland by diversifying wildlife habitats through protection of forests and wetlands. The WBWF also aims to sustain several endangered species as well as protect the elements necessary for all life: clean air, pure water, food, shelter, and space.

His love of nature began in grade school. “I was maybe 8 when a friend’s father gave me access to 1,100 acres of woodland,” Burton explains. “A little later – maybe I was 11 or 12 – my momma would drop me off along a dirt road in the middle of nowhere. I’d stay out in the woods by myself, and I became connected to that piece of property. When I got to my 20’s – I had just started racing and making some money – I began worrying about what would someday happen to that land.”

He self-funded his Foundation for its first 12 years. Later, as his name recognition and passionate outreached grew through NASCAR races, sponsors and other non-profits began to help. He has some issues with today’s NASCAR – frankly, almost every retired or unemployed driver has issues – but he quickly acknowledges that racing gave him a bully pulpit from which to speak.

“Everybody has seen land taken over by commercial or residential development, and it scared the hell out of me to think that something like that might happen to the (original 1,100 acres) I was involved with,” he says. “Even after I got some popularity and recognition through racing, I couldn’t turn my back on the land. I knew back then—when I was a full-time racer and a full-time conservationist—that we need to care about natural resources because they’ll be gone if we don’t. If we deplete those resources, we can’t survive as humans; we will someday deplete ourselves. We have already overpopulated the planet; we need to keep it healthy.”

Burton began buying parcels of land adjacent those original 1,100 acres. A few hundred acres here; a few over there; a few more in the neighboring counties. Eventually, he found himself with 3,500 acres that he wanted to preserve. (Today, his Foundation has 7,000-plus acres on its books). “Some of the land came from King George as grants to the early Virginia settlers,” he says. “Some of it’s on registries of historic places. We’ve done archeological
digs and tried to restore the history of the land. We’ve created habitat for everything from salamanders to black bears. The whole thing has turned into an ecosystem for wildlife. I’m not a tree-hugger, but I know that trees sometime need being hugged.”

Perhaps self-effacing to a fault, Burton acknowledges he’s neither a scientist nor an engineer. He’s not a fan of coal mining, but is a strong advocate for finding and marketing renewable energy. He’s not sure what to believe about global warming and the threat to the ozone layer. He admits he feels more comfortable in the world he can see and touch and feel than the abstract world of ozone and global warming.

“I just know that we need to be energy efficient and not dependent on our enemies,” he says. “(Whether we are reaching that point) depends on who you talk to and what region you’re talking about. I don’t have all the answers, but I know the land is in better shape now than in the 40’s and 50’s and into the 60’s and 70’s, when my grandfather and father were on the land. We have more programs and more knowledge about how to conserve the land and its wildlife than ever before. I’m optimistic because of the Federal, state and private organizations doing land management projects to undo what people have done in the past.”

To those who may not appreciate what Burton is trying to do, maybe this will help: “This is all about something that’s more important than me,” he says emotionally. “It’s a drive within me, and I love that I have enough passion to try to make a difference on this earth.”