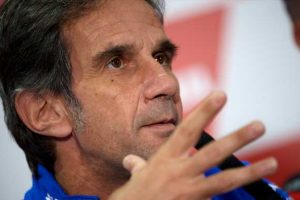 Swapping the MotoGP paddock for Formula 1, new Alpine racing director Davide Brivio says it was not an easy decision but an opportunity he felt he had to take.

Last year Alpine, the former Renault team, surprised many in the paddock when they announced that Cyril Abiteboul had left the team with immediate effect.

As of 2021 the team would instead by led by Brivio, who would be swapping from two wheels to four.

Brivio worked with Suzuki in MotoGP since 2013, took charge of the team’s full-time return to MotoGP in 2015 and led the team to its first title with Joan Mir last year.

“Of course it was not easy to leave my old team, an environment that I knew very well,” he told Crash.net.

“Formula 1 has been for me a dream for a long time and it’s very exciting for me to start something completely new, to get into a new environment.

“Of course I have a lot to learn, a lot to understand but it’s adrenaline for me, it’s oxygen to get to work and to learn a lot of things. It was an opportunity which I felt I had to take, probably I would have regretted if I didn’t take.

“So now here I am and I will try to do my best. I hope I can contribute to the Alpine F1 Team with my experience. It won’t be easy and I need some time, but I am fully committed to get involved as best as I can as soon as possible.”

Speaking at the launch of Alpine’s 2021 F1 car, the A521, Brivio outlined his role within the team.

“I will be in charge of the track operations, track activity so everything that happens on the circuit,” he explained. “Basically our job as a race team is to exploit the full potential of the car.

“It’s a big pressure and a big responsibility because we have over 1000 people between Enstone and Viry, preparing the chassis, the car and the power unit, and our job – we will be a much limited number of people at the race track – but there is where we have to extract the full potential of the car. So I will be in charge of that.

“Of course I’m not an engineer but I have to make sure that the engineers, the drivers, all the people involved, they have all they need to perform at the very best. In this way, if we are able to have a strong team – which is already in place – we will be able to extract the full potential of the car.

“So that is the job, to go to the circuit, to go around the world, and try to get out the best of what the guys have prepared at home. So we have big responsibility and big pressure because we have to give a value to their job.”

Alpine put the first laps on the the new car at Silverstone on Wednesday with Esteban Ocon in action.