David Coulthard: Vettel needs to give Mick some 'overtaking advice' 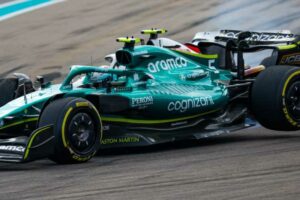 David Coulthard reckons as part of Sebastian Vettel’s guide to F1 for Mick Schumacher, he should give him “some overtaking advice”.

Schumacher is mentored by Vettel, the compatriots spending time together at grand prix weekends as the four-time World Champion shares his knowledge with the Haas driver.

But while Vettel and Schumacher content on social media is usually hugs or a kick around with a football, at the Miami Grand Prix it was contact between the two.

Racing for points, which would have been Schumacher’s first in Formula 1, the Haas driver tried to pass the Aston Martin up the inside with the two colliding.

Vettel said in the immediate aftermath that he “didn’t see” Schumacher coming with the latter saying that “clearly” his corner.

Both later held up their hands, admitting they could have done more to avoid the collision.

Coulthard, though, believes this one belongs to Schumacher alone.

Speaking to Channel 4, the Scot said: “Those guys are good friends and I think that Seb’s trying to guide Mick a little bit into his Formula 1 career.

“He definitely needs to give him some overtaking advice.

“And I loved how Mick was on the radio going ‘I had the…corner’. He doubted himself as he said it.

“And I think when he reflects on it, he made a mistake, that door was always going to close.”

Ralf Schumacher, however, believes Vettel carries more of the responsibility for the late-race crash.

“Mick can’t just vanish into thin air,” he told Sky Deutschland. “Sebastian has to look in the mirror.”

Vettel was forced out of the grand prix because of the crash damage with Schumacher, who had to pit for a new nose cone, last of the classified runners.

“Very, very unfortunate for both of us,” he said.

“If you look at it that way, I could have just stayed behind or tried harder to pass. But of course it’s always easy to talk about it afterwards.