David Coulthard: Leclerc would have beaten younger Max in Miami 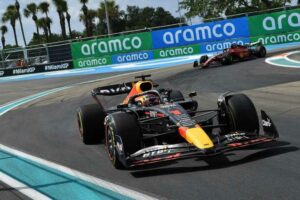 David Coulthard says it is too easy to say the Red Bull was the quicker car in Miami, the former F1 driver saying Max Verstappen deserves credit for driving “like the World Champion he is”.

Verstappen continued his record for retire or win in all this season’s grands prix as he raced to the victory at the inaugural Miami Grand Prix.

And he did so be passing both Ferraris out on track.

The Dutchman made short work of Carlos Sainz on the opening lap, a robust move into Turn 2, while on lap 9 he overtook Charles Leclerc for the lead through Turn 1.

It was an impressive drive but one that had pundits saying it was almost inevitable given that the Red Bull, which has been upgraded, is the faster car at present.

Not only does the RB18 have a straightline speed advantage over the F1-75, but in Miami it was also able to match the Ferrari through the slower corners.

Coulthard says there is more to the story, there’s Max Verstappen.

Charles and Max put on a show in Miami 🤩#MiamiGP #F1 pic.twitter.com/MD868DZWuQ

“I don’t think there is a big difference in the actual cars,” he said to Channel 4, “which I find fantastic when you consider they’ve been designed and built in different places.

“I think it’s about tyre management on any given weekend that is going to be the deciding factor.

“Checo Perez was not that far behind Max on-track, he doesn’t deliver that last little bit of pace Max does, so yes there is a Max factor.

“But I think it’s not as easy as saying ‘the Red Bull is the quicker car’.”

The former F1 driver, a 13-time grand prix winner, believes the Verstappen factor showed on the restart after the Safety Car.

The lead that Verstappen had built up over Leclerc was eradicated when Lando Norris and Pierre Gasly collided, bringing out the Safety Car.

Verstappen was quick to pull away on the restart but Leclerc stayed within DRS, which this season has proved to be rather powerful, as he tried to hunt down his championship rival for the lead.

Despite the pressure, Verstappen held firm to take his third win of this season.

“The pressure on Max in that situation was off the scale,” Coulthard said.

“And you could see them after the race, both of them looking pretty hot and sweaty, this was a hard race, which I loved to see.

“And I think that Max really drove like the World Champion he is, had that been a younger Max or a lesser Max, then I think Charles probably could have got the pass done.”

Five races into this season and Leclerc leads Verstappen by 19 points with Red Bull six behind Ferrari in the Constructors’ Championship.