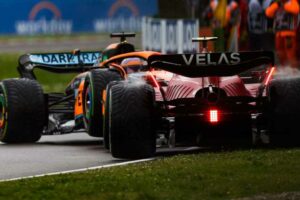 Racing for position on the opening lap, Ricciardo mounted the inside kerb at Tamburello and went sliding into Sainz’s Ferrari.

Both cars were off in the gravel but while the McLaren driver was able to rejoin the race in last place, Sainz was out of Ferrari’s first home race of the season.

Ricciardo was quick to apologise to the Spaniard and his Ferrari mechanics, heading to the team’s hospitality centre to say sorry.

Davidson, however, feels it is an incident that should never have happened in the first place.

“It’s a mistake that shouldn’t be happening at this kind of level and it’s a mistake that Carlos Sainz wasn’t expecting from someone usually as polished and as experienced as Daniel Ricciardo,” Foxsports quotes the the former driver turned Sky pundit as having said.

Daniel Ricciardo reflects on his Lap 1 incident with Carlos Sainz 🗣

“To end a Ferrari driver’s race on lap 1, I’d be making a quick exit if I was him.

“I can tell by his body language he was embarrassed. It’s good that he went and apologised to Carlos. It shouldn’t be happening.”

Nico Rosberg was a fair bit kinder calling it a racing incident although one that Ricciardo was responsible for.

“It’s okay,” said the 2016 World Champion. “Nevertheless I did see Daniel do a little bit of a snap mid-corner, so pushing a little bit too much and it was him who drifted towards Carlos.

“I would see the fault a little bit more on Daniel, but it’s okay to put it down as a racing incident.”

Sainz revealed that Ricciardo had spoken with not only him but in front of all his Ferrari mechanics when he came to apologise.

“The mechanics were all with me and we all thanked him for the gesture,” said the 27-year-old.

“That’s why there’s no hard feelings with Daniel.

“What happened with him could have happened to anyone out there today but unfortunately it had to happen to me. It’s how it is.

“The incident has really no mystery to it. What happened is very clear to everyone.”

Ricciardo finished the grand prix in 18th place, dropping to P11 in the Drivers’ Championship, while Sainz’s second DNF in succession meant he fell to fifth in the standings.