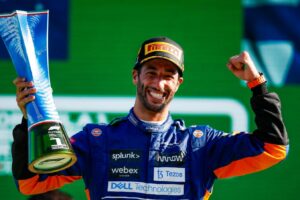 Daniel Ricciardo is keen to double his 2021 victory tally for McLaren this season – at the very least.

The Australian endured a tough first year with the Woking-based team, being outperformed for most of the campaign by Lando Norris.

But there was one particularly big exception in that scenario, when Ricciardo revelled in the team’s highlight of the season as he led home a one-two finish ahead of Norris to take Italian Grand Prix victory.

This term, the 32-year-old, who now has eight career F1 triumphs with the other seven achieved for Red Bull, is looking to go one better than that solitary win as a minimum target – even though McLaren have not yet shown they have the performance with the MCL36 to challenge right at the front.

“Hopefully it will be two victories this year. Or more,” said Ricciardo, quoted by Sport Bild.

“But I’ll take it as it comes. I’ve already set goals in my head. But above all, I don’t want to go through another difficult season like 2021.

“Despite the success at Monza, it wasn’t an easy year. Looking at the results, I have to say there is still room for improvement in qualifying. That didn’t go well.”

Insane. Haha love this so much 😆😆 https://t.co/dhrORyw8LS

Ricciardo’s start to 2022 was not what he had hoped for either, having to miss official testing in Bahrain after contracting Covid-19 and then finishing 14th in the opening race before having to retire from the Saudi Arabian Grand Prix.

There were much more promising signs at his home race in Melbourne though, as the McLaren MCL36 took a step forward relative to its rivals and Ricciardo crossed the line sixth, just behind Norris to get his first points of the campaign on the board.

“I had never been so excited in the break and so looking forward to a new car,” said Ricciardo. “As soon as you sit in the car, everything around you looks completely different.

“You’re higher, the tyres are bigger. It’s an adjustment. The visibility is limited, but I already felt comfortable on the track. The car is much heavier, which means it is harder to control with small movements on the track.”

Asked what he had taken away from the difficulties of last season, Ricciardo added: “That I can still learn. That you can also overcome lows and that even after years in Formula 1, you still have to go different ways to be successful – because if you don’t change and adapt, someone else will and they will succeed.

“Even on the day I finish my career, I won’t be the perfect driver. But of course you also have to trust what you’ve learned in the past.”