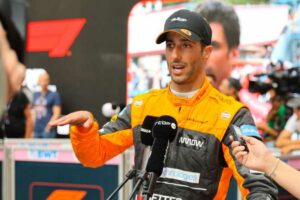 Daniel Ricciardo is not concerned by the presence of IndyCar drivers testing Formula 1 machinery with McLaren this season.

McLaren’s driver roster has expanded in recent months with the additions of IndyCar champion Alex Palou, as well as highly-rated Colton Herta who had been linked with Alfa Romeo last season, alongside already-contracted Pato O’Ward, who took part in last year’s young driver test in Abu Dhabi for the team.

Herta recently took part in a two-day test at Portimao behind the wheel of last year’s McLaren, with the team assessing their options for who to put in the current car for their two mandatory ‘rookie driver’ slots in free practice later in the season.

This has led to rumours one of the drivers may be in the process of being primed for a seat at McLaren once Ricciardo’s contract expires, but the Australian does not see that as being the case.

“I think it’s only been what the media has made of it,” said Ricciardo, quoted by Fox Sports Australia. “Any of the IndyCar drivers that have done even some F1 testing, as Colton has done, their programme is fully IndyCar.

“It’s a chance for them to get behind the wheel of F1 but there’s no crossover.

“The media kind of sees that and thinks ‘oh, what’s going to happen, is this potentially an F1 seat or something?’, but it’s only what they have made it out to be.

“Internally, everything’s very clear about where we stand as a team and who’s driving what category.”

Ricciardo issued a statement on social media recently reaffirming his commitment to seeing out his McLaren contract, which runs until the end of 2023.

He added that despite the tests being run by the team with other drivers, he is not worried about the pressure that comes with his struggles for form.

“No concerns,” he said. “I’ve had a lot of support from the team, obviously people like Zak [Brown, McLaren CEO].

“I feel like there is always a form of pressure in this sport. Sometimes it’s just the pressure you put on yourself.

“There’s always noise. Sure, maybe there’s been a bit more noise of late and that’s why I made a statement last week. It was just to try and set the record straight and so everyone would hear it from me and not make their own assumptions or anything like that.”