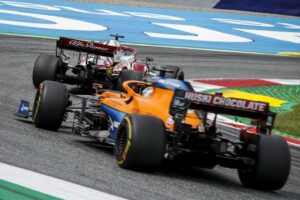 Daniel Ricciardo has admitted the Styrian Grand Prix was one of those days when he “really didn’t love” Formula 1.

The Australian said in a recent interview that he “falls out of love with the sport at least once a year” and that last month’s Monaco Grand Prix, in which he finished 12th, was one such occasion.

Another has come along only five weeks later at the Red Bull Ring in Austria, where Ricciardo ended up only 14th after thinking he had been set for a much better result.

Starting 13th on the grid, the McLaren driver surged up to eighth early on but then lost all of those places, and ultimately one more, when his MCL35M suffered a temporary loss of power on lap seven of 71.

It was another tough weekend, compared to his team-mate Lando Norris who finished fifth, for the man who turns 32 on Thursday – media day for round nine of the 2021 World Championship, the Austrian Grand Prix at the same venue.

Chin up, @DanielRicciardo. 🧡 Next week is a chance to bounce back straight away.#StyrianGP 🇦🇹 pic.twitter.com/tsqbJu9wWe

“When it’s low, it’s really low, the sport. This was one of those days I really didn’t love it,” lamented Ricciardo, who was finishing out of the points for only the second time since joining McLaren last winter.

“The weekend went from bad to worse, and it’s just one of those ones.”

Explaining the power issue, Ricciardo said: “I felt it out of Turn 1, then I got some switches and we were able to recover it by Turn 7 or Turn 8. But everyone I had passed on lap one I waved back past me. Then you’re in the train and that’s it, afternoon done.

“It was fine after that, so in a way that’s kind of what sucks even more. When you drop back that much sometimes you are like ‘let’s end the pain’.

“We still had a long race to go, but once you’re in the train everyone has DRS, and clear air is so important around here. It was so static that I think everyone’s pace was quite similar in dirty air. So there was really nothing to do after that. The race changed like a switch.”

While Ricciardo was keen to put the negative experience behind him, he is also grateful to have a swift shot at redemption on the same circuit in his first race as a 32-year-old.

“As much as I want to swipe out of the paddock, I’m glad we get another chance,” he said.

“It can only be better both Saturday and Sunday. So I look forward to coming back and trying again and trying to get a bit of help from someone, somewhere, anywhere.”