Daniel Ricciardo Not Living Up to the Hype for McLaren F1, Racing Boss Zak Brown 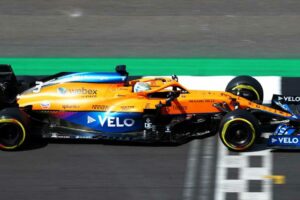 McLaren Racing CEO Zak Brown has conceded that the team has been left slightly surprised at Daniel Ricciardo’s relative struggles during the opening portion of the 2021 Formula 1 campaign.

Ricciardo joined McLaren on a three-year deal for the 2021 season, linking up with the team’s long-term protégé Lando Norris, who debuted in 2019. Ricciardo and Norris were expected to create a formidable partnership in Formula 1’s midfield as McLaren strived to close the gap on the front-running Mercedes and Red Bull teams.

Ricciardo, a victor of seven Grands Prix during his Red Bull days, finished fifth in last year’s championship and returned Renault to the podium positions on two occasions.

But across the opening nine rounds of 2021 he has racked up only 40 points compared to the 101 garnered by Norris, who has appeared on the podium at three Grands Prix. Norris has only once finished outside of the top five this season in race trim, which is a position Ricciardo has yet to achieve.

Norris is fourth in the overall standings, will Ricciardo is eighth. Norris and Ricciardo will start Saturday’s Sprint Qualifying race sixth and seventh, respectively, based on Friday’s times.

This weekend’s British Grand Prix, meanwhile, marks a decade since Ricciardo made his Formula 1 debut, and he quickly needs to get on top of McLaren’s MCL35M.

“He is definitely getting closer, and his race pace is stronger than his qualifying pace at the moment,” said Brown ahead of this weekend’s round at Silverstone.”

Brown outlined that Ricciardo’s struggles “shows how good Lando is” and acknowledged that he is “up against tough competition” in respect of the 21-year-old Briton.

“I think we are surprised, he’s surprised, that he’s not near Lando’s pace but the good news is everyone’s working very hard, everyone knows where we need to improve, Daniel knows where he needs to improve,” Brown said. “So there’s no excuses, just hard work ahead of us, and hope he gets on top of it because we need two cars constantly at the front to hold on to third in the championship.”

Early on in the season, those who switched teams struggled compared to teammates. But after a challenging start, both Carlos Sainz and Sebastian Vettel have delivered a trophy to new employers Ferrari and Aston Martin, respectively. Sergio Perez has won for Red Bull, while the returning Fernando Alonso is on a point streak with Alpine.

After a trying time at street venues Monaco and Azerbaijan, Ricciardo had targeted a trio of events across successive weekends—at the expansive Circuit Paul Ricard in France and known quantity Red Bull Ring, Austria—to provide an opportunity to learn. But he continues to trail Norris.

“I thought that a tripleheader, the last ones, would have been really good,” said Ricciardo. “But they were okay but I would not say really good. I cannot deny that just seat time is good. And trying to spend more time behind the wheel. These little changes here and there will probably feel fairly insignificant, because I am still trying to discover a few things with the car. It will all probably just blend into just general learning.

“I’m not overthinking it. I am pushing hard and working hard, but I am also very relaxed in the mindset, like let’s get it out on the track and drive hard and fast and make some nice incremental improvements.”

Ricciardo, speaking on Thursday at Silverstone, emphasized that he is not yet fretting over the situation.

“It is something that I have now acknowledged that it is probably not going to come overnight or with the click of a finger,” Ricciardo said. “It is just trying to understand it. Straight after qualifying or a race you are emotional and can be frustrated, you always want more. Until you are winning or standing on the podium you will always be left feeling a little bit that there is something left on the table.

“Once those moments pass, it is really just getting into the data , having conversations with engineers, getting on the simulator, and putting the work in to try to improve and fast-track this kind of phase where we are at the moment.”