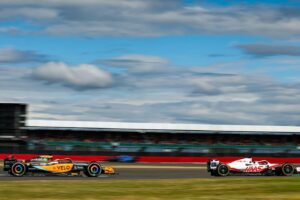 A downbeat Daniel Ricciardo thought it was a “bit odd” that he had “zero pace” during the British Grand Prix.

Two days after his 33rd birthday, the Australian found himself in the ignominious position of being among two drivers, the other one Yuki Tsunoda, allowed to unlap themselves during the Safety Car period just after the three-quarter mark at Silverstone.

The McLaren driver caught up with the pack but could not improve his position, crossing the line 13th whereas his team-mate, Lando Norris, had an outside sniff of a podium finish amid a fierce battle for the positions behind winner Carlos Sainz before eventually having to settle for sixth.

But it was another weekend, like so many since he joined McLaren, when Ricciardo was decidedly the second string within the team. He had qualified 14th compared to Norris’ sixth.

“Zero pace,” a less-than-jovial Ricciardo told reporters afterwards. “A little bit like Barcelona where I didn’t seem to operate at the same level of grip as the cars around me.

“I could just feel it through the tyres as well, trying to carry speed.

“Obviously a little bit confused by that at the moment. It’s clear what I felt, but the reasons why I’m obviously not sure. It was just a bit odd, so we have a bit of investigating to do.

“Hopefully we find some answers because obviously it’s a quick turnaround to Austria.”

Hear from @DanielRicciardo after a difficult day at Silverstone. 🇬🇧 Next up… Austria. 👊#BritishGP 🇬🇧 pic.twitter.com/0VJ91gn997

Another issue Ricciardo encountered was a DRS failure on lap 31 of 52.

“Obviously it’s tough to overtake with that as well,” he added. “But simply we weren’t really quick enough anyway. It was a bit of a lonely afternoon.”

The one bright spot for Ricciardo? Hearing Zhou Guanyu and Alex Albon had escaped unscathed from nasty accidents at the opening corner, although the latter-named Williams driver was taken to hospital for precautionary checks.

“Obviously a positive is I heard the drivers were okay,” Ricciardo added. “That’s obviously a big one.

“He wasn’t in a position to deliver competitive lap times yesterday and today.”

In the Drivers’ World Championship, Ricciardo now finds himself in 14th position with 15 points, 43 fewer than Norris who sits seventh.