Daniel Ricciardo: Every driver I speak to loves the Australian Grand Prix 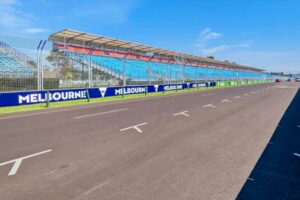 Excitement is building for Daniel Ricciardo ahead of the Australian Grand Prix’s return – an event he says is loved throughout the grid.

The 2019 Australian Grand Prix was the last time we saw Formula 1 action at Albert Park as the 2020 staging was abandoned just before FP1 due to the escalating global pandemic.

It goes without saying then that Ricciardo simply cannot wait to go racing again in his home country.

But in addition to himself, he says all the drivers savour competing at Albert Park.

“I’m excited to go home, definitely – it’s been a while,” said Ricciardo, quoted by the Formula 1 website.

“I’ve heard [ticket] sales have been nuts and it will be an awesome atmosphere, so I can’t wait.”

“It’s personal to me because I’m Aussie and it’s a home one and that’s a privilege, but every driver I speak to about Melbourne they love it as an event.

“It’s exciting to go through the track changes as well this year, see what kind of racing that produces. So just a big bundle of excitement.”

During the grand prix’s absence, work took place to redesign the Albert Park track with a range of corners reprofiled or widened to create better racing action.

Turn 11 is now expected to be a prime overtaking spot, while five other turns have been widened. Overall, the number of corners has dropped from 16 to 14.

Ricciardo was part of a group of drivers who gave their input into the redesigning process, so the Australia native now expects the quality of racing will be upgraded.

“I think with the new design at Albert Park, it’s really focused on improving the racing, the spectacle on Sunday, to create more opportunities for overtaking,” he said in a video called ‘The Evolution of Albert Park: The Brand New Formula 1 Australian Grand Circuit’.

“It’s a beautiful circuit but it’s always been quite narrow and tight, and therefore quite tricky to overtake on. So we’ve really tried to exploit some areas to allow more slipstreaming, to allow for more chances for overtaking under braking. So I think it will be a different spectacle this time around.

“Us drivers, a bunch of us were consulted on this. We were allowed to give our thoughts and input. We may not all be aligned but I think the purpose of this is to make the Sunday better. I had that in mind when I gave my input.”

Ricciardo will be looking to score his first points of the 2022 campaign at the Australian Grand Prix.