Home » Racing » Daniel Ricciardo: Drivers can 'macho' porpoising but for one race

Daniel Ricciardo: Drivers can 'macho' porpoising but for one race 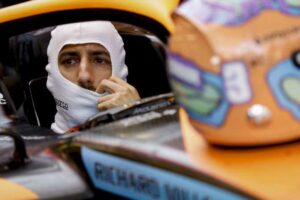 Daniel Ricciardo says the drivers can “macho” their way through porpoising, but for a race, not in the long-term.

The McLaren driver has joined the list of drivers complaining about the bouncing that they endured at the Azerbaijan Grand Prix.

Although Ricciardo finished inside the points, only his second top-ten of this season, he says he was in pain as it felt as if his “brain and spine” had been compressed.

Like his rivals, he’s worried about the long-term effect that the bouncing could have on his body.

He told The Race that while drivers “can macho it if you want”, they can only do that for an individual race, not a season.

He added: “Obviously, like the compression, you are sore and you feel like you are kind of getting squeezed, so it’s not good.

“So, it’s not a normal thing, and I think also the frequency, this kind of shaking of the brain and the spine, I don’t think it’s good long-term.

“It’s one of those ones where we don’t want to be naive or ignorant and just tough it out when there could be some kind of long-term damage.”

Lewis Hamilton: “I can’t express the pain that you experience, particularly on the straight here. And at the end, you’re just praying for it to end.

“Once we fix this bouncing we can be right there in the race, but we were losing for sure over a second just from bouncing." #F1 pic.twitter.com/6igWEKAmSZ

The topic is dividing the paddock, some teams wanting the FIA to implement changes – perhaps a minimum ride-height – to resolve the problem while others feel it is up to each individual team to find a fix.

Red Bull team boss Christian Horner even went as far to say he feels the teams are playing it up.

Asked what he could do if the RB18 had a major problem with porpoising, he said he’d tell his drivers to “bitch as much as they could over the radio and make as big an issue out of it as they possibly could”, adding that it is “part of the game”.

Asked whether he believed that was what some teams were doing, he replied: “Of course it is.”

Ricciardo and Mercedes, though, aren’t the only ones worried about long-term health issues.

“We kindly asked the FIA to look into it, not listen to the teams so much and to listen to us,” said Ferrari driver Carlos Sainz. “We are saying it’s getting to a point where we are struggling to handle this.

“I don’t think we need a medical commission, we just need something smarter on the suspension or the way the cars are being run.

“But we need the FIA to act as soon as possible – if not, it will start accumulating.”