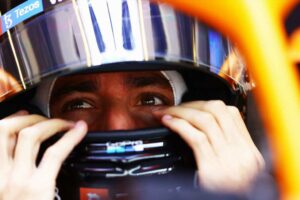 McLaren Formula 1 driver Daniel Ricciardo has a feeling that this year’s U.S. Grand Prix at Circuit of the Americas in Austin, Texas, will be anything but an ordinary weekend at the F1 office.

“I love it. I love it here,” Ricciardo said. “It’s got a bit of everything. It has elevation changes in the first part of the track, it has twisty, technical corners, it’s quite bumpy as well, but I like that, trying to get traction all around. I’m all about it.”

In addition to his F1 duties, Ricciardo will be channeling the late NASCAR great Dale Earnhardt this weekend with a tribute helmet and a spin in a Earnhardt Cup car.

“I’ve been a big Dale Earnhardt fan since I was young,” Ricciardo said. “And I found out Zak (Brown, team principal for McLaren) has a 1984 Chevy Monte Carlo that Earnhardt drove in his car collection. And we made a bet – ‘You get a podium and I’ll have you drive the car,’ and so I won the Italian Grand Prix at Monza.

So, Zak Brown came through?

“Yes, he had it towed down here and I get to drive it on Saturday,” Ricciardo said. “It’s going to be a really awesome experience.”

Ricciardo said another awesome experience would be NASCAR, something that he’s said that he’d consider after his F1 career is over.

“I’d definitely like to. I’m very competitive,” he said. “I’d love to have a proper go at it, I think on a road course would be better than an oval… I’d love to. I actually have a helmet this weekend that is a tip of the hat to Earnhardt. I think that will be quite cool for the NASCAR fans here.”