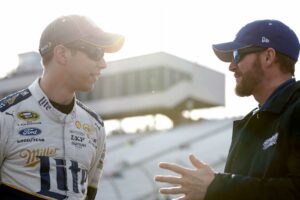 The Brad Keselowski story has several chapters with Dale Earnhardt Jr. as a supporting character.

It was Earnhardt that signed off on giving Keselowski his first full-time season in the NASCAR Xfinity Series at JR Motorsports. That tenure included several ringing endorsements that led to his Cup Series debut with Phoenix Racing and his eventual championship caliber run at Team Penske.

Keselowski set out to emulate Earnhardt, in a sense, in launching Brad Keselowski Racing in the NASCAR Truck Series and ARCA Racing Series for 2007-17.

Now, that relationship comes with a honest take about his friend’s newest endeavor with Roush Fenway Racing.

On the latest episode of the Dale Jr. Download podcast, Earnhardt fielded a question about Keselowski and the decision to join Roush as a driver-owner, specifically expressing hesitation that the combination would produce immediate results.

“Brad is going to Roush,” Earnhardt said. “They’ve struggled to compete with where Brad is currently at Penske. I think that kind of continues. So, when Brad goes to Roush, things just aren’t going to turn around immediately. I could be wrong, and I hope that I am wrong. I hope that they get everything out of that deal that they want right away.

“But I think it will be a process to improve cars and get things better and get that organization to where they used to be. I think Brad can do it. I think Brad can get them there, but I don’t know if it happens right away. I would not be surprised to see the performance stay relatively where it is now with a few glimpses of the future mixed in. You’re going to have those moments where you’re going to see Brad overachieve in those cars in the first year, and then that’s kind of what the potential is for them in the future. I expect it to go that way.”

To his point, Roush Fenway has increasingly dropped further away from the top-10 on a weekly basis and is a far cry from the organization that placed all five of its cars in the 10-team Chase for the Championship in 2005.

On the other hand, the 2022 season will see the debut of a new car, the much-heralded Next Gen — a spec platform intended to level the playing field and reduce the costs to participate at the highest level of the discipline.

Earnhardt previously tempered expectations about what Denny Hamlin should have expected in his first season as a Cup Series team owner.

23XI Racing made a huge splash over the summer of 2020 with Hamlin and NBA legend Michael Jordan launching a Toyota supported race team for Bubba Wallace. The expectation was that Wallace would make the playoffs for the first time in his career. Wallace himself cited a goal of two wins in 2021, but both goals appear unlikely to manifest in the final months of the current generation car.

Earnhardt offered poignant commentary on what Hamlin would experience as a driver who owns a team last summer, and the same very well could apply to Keselowski too, albeit with the fresh start represented by Next Gen.

It’s not apples to apples, as Keselowski will be slowly integrated into the current Roush Fenway Racing infrastructure before taking a greater role after his driving days, but it’s a comparison nevertheless.