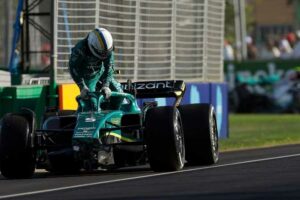 Aston Martin team principal Mike Krack has admitted that continued crashes could result in development being postponed as the costs mount up.

It was an expensive weekend at the Australian Grand Prix for Aston Martin with both Sebastian Vettel and Lance Stroll damaging their car at some point.

Vettel, who was returning from a bout of COVID-19, went off in FP1 before a heavy crash in the race itself while Stroll also went off in FP1. Later during qualifying, Stroll collided with his fellow Canadian Nicholas Latifi after appearing to not see the Williams driver overtaking him on the inside.

It was not just on-track incidents which hit the Aston Martin wallet and team principal Krack said they also had a problem with the power unit on Friday.

“We had a very difficult weekend because we had a lot of car damage,” he said as reported by motorsport.com.

“It started already on Friday, we had a small problem on the power unit, which we had to change.

Vettel has hit the wall and stopped on track

“So we didn’t get so much time. And then obviously, the on-track incidents that were visible to everybody led to a lot of work.”

Krack was then asked if the number of crashes would have a knock-on effect on how much the team can develop and the 50-year-old conceded that is something the team would have to consider.

“So you can calculate quickly how many we will need to go to Imola, and actually yes, the question is correct.

“Will we have capacity to develop, or will we need to use our capacity for making spares? So these discussions are ongoing.”

Aston Martin are now the only team yet to score a point this season but Krack remained optimistic and said there were small signs of progress.

“I think when we came here, we thought we will have been a little bit better than we have been before.

“But obviously we could not show it so much over the weekend, because then we had much more disruption than you can afford at the end of the day.

“So I think at the end of the race, we were still in the position where we hoped we could score, but then eventually it didn’t happen. Overall, a quite disappointing weekend, I have to say.

“So now we need to really collect all the bits that we have, as we are starting to run low on spares. So it’s something that we need to address.”