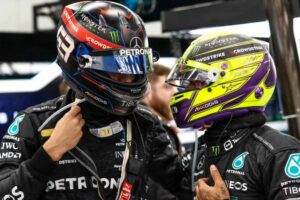 With Mercedes not contending for wins, David Coulthard says George Russell and Lewis Hamilton must now speak up and take them back there.

The Silver Arrows have dominated the V6 turbo-hybrid era so far, winning all eight Constructors’ Championships on offer, but in 2022 that streak is very much under threat.

Red Bull have retained their spot as a leading force at the start of this new regulatory era in Formula 1, but Mercedes and Ferrari have effectively traded places.

Now it is Ferrari scrapping with Red Bull for wins in the early stages, while Mercedes are at the head of the midfield but comfortably down on the leading pace.

Considering Mercedes’ unrivalled success since 2014, Russell naturally would have been expecting to have moved from Williams into a title-contending car, while for Hamilton, being in a position for another shot at that record eighth Drivers’ title would have been the expectation.

With neither driver currently in a position to achieve their aims, Coulthard says this is where Russell, alongside Hamilton, must be the “voice” that takes Mercedes back to the top.

“He (Russell) was brilliant with Williams. It led to him being courted by Mercedes, as everyone knows,” Coulthard told the Sunday Mirror.

“But the honeymoon period when you can do no wrong changes quickly, particularly when there’s an expectation that, given the car you are driving, you should be in the top three.

“What’s actually happened is Ferrari and Red Bull have come flying out of the blocks and there are some who might judge that George’s first couple of races have not been up to standard. I wouldn’t agree with that. I think he’s handled the car and the situation well. You can only drive the car you’ve been given.

“His next job will be, along with Lewis Hamilton, to be the voice that enables his Mercedes team to develop a winning car.”

Coulthard has been extremely impressed with Russell’s start to life at Mercedes, the Briton having finished P4 in Bahrain and P5 at the Saudi Arabian Grand Prix, while he comfortably outqualified Hamilton at the latter event.

“I’ve been super-impressed – George has performed in line with my expectations. For me, he’s a brilliant all-round package,” said Coulthard.

“He has speed, he has excellent communication skills. He’s a modern version of a top professional racing driver. I thought that before the season started and I’ve seen nothing since to change my mind.”

Russell is not the only driver Coulthard is full of praise for – that also extends to McLaren’s Lando Norris.

McLaren, like Mercedes, have started 2022 on a poor note, although Norris got himself and the team back to points-scoring ways with a P7 finish in Saudi Arabia.

Coulthard believes both drivers have been a “breath of fresh air” for Formula 1.

“Firstly, because he’s British. And secondly, because he’s bright-eyed, enthusiastic and an excellent communicator. It’s a gift to be a professional sportsperson. He’s embracing it and I think it’s inspirational.

“I’ve got a 13-year-old son and I want him to look up to the likes of George and Lando and they have been a breath of fresh air.

“There have been periods when it’s a bit staid, but you can’t say that about Formula 1 at the moment – and a lot of that is down to the excitement those two are generating.”