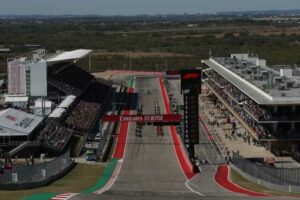 Given the changes to the surface since F1 last raced there, how the Pirelli tyres fare on the Circuit of the Americas is somewhat unknown.

Since the first F1 race there in 2012, the Austin track has proved a popular addition to the calendar and the United States Grand Prix went ahead every year until 2019.

It was meant to take place in 2020 too but the event was called off as a result of the global pandemic and is returning this season.

Since the last race much has changed, with a huge amount of the track being resurfaced. In fact, changes are being made to it even now, with bumps being reduced following complaints from MotoGP riders.

“The areas that were raised by the bikes are different areas to those that were resurfaced,” said FIA race director Michael Masi.

“Tony Cotman, who’s one of the FIA circuit inspectors and was previously IndyCar race director, who is in the US, has been out to Austin already during the week, done a report and the circuit is doing some changes for us to sort of address some of the concerns.

“They will grind some bumps and so forth, but we’ve got some time to do it. So they will do what they can within the timeframe.”

Back after a one-year absence, the Circuit of The Americas hosts the 2021 #USGP. Here’s everything you need to know about the return to Austin, Texas 🇺🇸 #Fit4F1 #F1 #Formula1 #Pirelli https://t.co/kvtcirC72p pic.twitter.com/6SnZ5NVIPU

Given all of the changes that have been made, Pirelli do not know what to expect from the circuit this time around.

Indeed, their F1 chief Mario Isola says how the tyres behave there is a “question mark” to the Italian company.

“Although the teams have quite a lot of experience of Austin, this year they face a track that has changed a bit compared to 2019 when we last raced here,” he said.

“Around 40% of the track has been resurfaced, but due to COVID-19 restrictions we were not able to send our personnel to analyse the new asphalt, so its characteristics are a question mark for everyone and we will only discover the final effects on tyres and car performance in general when we are there.

“As usual, the tyre nomination was done based on data obtained before the race, with the compounds in the middle of the range well suited to the circumstances.

“With the championship battle so finely poised as we enter the final few races of the season, it’s clear every element of strategy will count – as we saw at the last race in Turkey.”

Acura Will Skip Hybrids and Jump Straight Into Making EVs