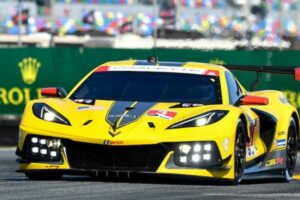 It will also be the last.

The GT Le Mans class will come to a painful end at the conclusion of the 2021 season. It wasn’t that long ago that the GTLM class had a respectable car count: in the 2018 Rolex 24 at Daytona, there were nine entries.

In Detroit this year, there are two, both Corvette C8.Rs. Yes, it’s a non-points race, but that didn’t keep all those GTLM entries away – there just hasn’t been any except for a BMW or two. GTLM traditionally hasn’t been a part of the Detroit race weekend because some of the teams were usually busy preparing for the 24 Hours of Le Mans this week on the calendar, but it has been postponed to late August this year due to COVID-19 concerns.

Points or not, in the first race for the Corvettes since Sebring in March, the team will be pushing as hard as ever. “To go back there with the Corvette C8.R after such a strong opening year in 2020 and a strong start in 2021, it’s going to be cool to show them in person what these cars are able to do,” said Jordan Taylor, driver of the number 3 Corvette.

So without GT Le Mans, what’s the future of the Corvette race car? Good question. The GTE-Pro class remains in the World Endurance Championship, which is class Corvette races in at the 24 Hours of Le Mans. But it seems unlikely for Chevrolet and GM to fund a full season for a primarily overseas series.

More likely is that the Corvette will be accepted into the new GT Daytona Pro class, which will race alongside the current GT Daytona class, but there will be separate podiums and points and driver experience levels. GT Daytona cars are FIA GT3-spec, essentially the same the world over. Corvette isn’t a GT3 per se, but reportedly they’ve asked to be allowed to tweak the current GT Le Mans C8.R to fit GTD Pro, which, among other differences, includes the addition of anti-lock brakes. Reportedly Chevrolet has already retrofit a car with ABS and tested it.

As it is with GTLM, the new Pro class will be factory-supported. Full factory support – meaning car ownership, for one thing – isn’t allowed in GT3, meaning GT Daytona.

It is also probable that Chevrolet will build a GTD-legal GT-3 car outright, most likely engineered and constructed by Pratt & Miller, builder of the current GTLM car. There’s no evidence that Chevrolet is considering a Corvette version of the new LMDh Prototype car, which will replace the current IMSA Prototype class for 2023. If GM goes the LMDh route, it will likely stick with the Cadillac badge, which is worn by the current Prototype. The Prototype cars were badged as Corvettes before that changed to Cadillac.

But that’s all in the future. Yes, the two C8.Rs will be racing against themselves this weekend, but that shouldn’t lessen the excitement of the Chevy employees who will visit Belle Isle and cheer on not only the Corvettes, but the three Cadillacs battling two Acuras and a Mazda in the Prototype class.