Home » Racing » Confirmed: Nikita Mazepin will not race for Haas in Formula 1

Confirmed: Nikita Mazepin will not race for Haas in Formula 1 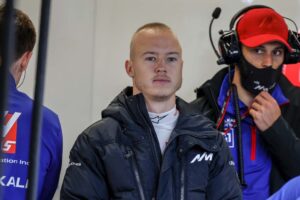 Haas have confirmed a split with title sponsor Ukralkali and driver Nikita Mazepin with immediate effect.

The Russian’s future had been in doubt after his father Dmitry’s sponsor branding through Uralkali was removed from the team’s cars after Russia’s invasion of Ukraine last week, although he continued his running as planned around Barcelona last week.

Team principal Guenther Steiner admitted that Mazepin’s future with the team was something that needed to be addressed, while the Russian himself said he would focus on things that were in his control, as the decision surrounding his seat was out of his hands.

Russian and Belarusian athletes have been banned from competing across the sporting world, but they are still eligible to compete in Formula 1 under a neutral flag – but Haas have decided to terminate Mazepin’s deal for the upcoming season regardless.

Steiner said Haas are still in a good financial position despite the presumed loss of their title sponsor, saying they have “other resources” to call upon for their monetary needs.

“Haas F1 Team has elected to terminate, with immediate effect, the title partnership of Uralkali, and the driver contract of Nikita Mazepin,” a team statement read.

“As with the rest of the Formula 1 community, the team is shocked and saddened by the invasion of Ukraine and wishes for a swift and peaceful end to the conflict.”

The news on Mazepin and Uralkali follows after Formula 1 cancelled the contract of the Russian Grand Prix in Sochi, with countries around the world heavily condemning the military action undertaken by Vladimir Putin in Ukraine.

As for Mazepin’s replacement, that is yet to be announced. Reserve and development driver Pietro Fittipaldi is the strong favourite, with Ferrari-backed Antonio Giovinazzi also on the shortlist.