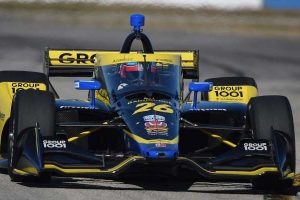 Colton Herta is ready for a changing of the guard in the NTT IndyCar Series.

Herta, who turns all of 21 on March 30, is setting the loftiest of goals for himself for his third full season in the series. Two years of watching veterans Josef Newgarden in 2019 and Scott Dixon last year hoisting the series championship trophy is plenty.

How about a championship of your own in 2021?

“Yeah, I mean, I wouldn’t be in IndyCar if I didn’t have the confidence in myself to perform,” said Herta, driver of the No. 26 Honda for Andretti Autosport. “Yes, I believe I can. I think we showed it last year of what could have been. If I didn’t have that slipup at Iowa, mess that up for us, we could have been really good in the championship hunt going into the last round.”

Herta won one race (Mid-Ohio) and finished third in the championship in 2020, 116 points shy of six-time IndyCar champion Dixon and 100 points back of runner-up and 2019 champion Newgarden. It’s a racing neighborhood that Herta would like to be hanging out in on a weekly basis in 2021.

“The biggest setback is that we need to win more races,” Herta said. “Can’t be winning one or two races a year and winning a championship. You need to be winning three or four races. That’s kind of my goal is to try to get to that number. That’s been the trend the last few years for guys that have won the championship, is they’re winning four races a year. When they’re not winning, they’re finishing on the podium.”

Herta finished on the podium just twice a year ago, but still managed to improve from seventh to third in the season standings, year over year.

“I like to see progress every year in myself, more so on the championship side of things,” Herta said. “I’d like to make a true championship run down to the wire, have the ability to truly win it. That’s my goal. That’s the team’s goal.

“Obviously alongside with that, winning the Indy 500 and putting a lot of resources and time towards that at the same time. But kind of cutting out the mistakes, changing kind of those top fives, fourth and fifth places that we had last year, we had a bunch of them, into podiums, and some of those podiums we had into wins. We need to win a little bit more and we need a little bit more podiums, a tiny bit more consistency to really make a true championship run.”

One change for Herta this year at Andretti Autosport his dad, former IndyCar racer Bryan Herta, will be calling the race-day strategy. Bryan hopes to take son Colton to a a level dad only dreamed of, as Bryan never finished higher than eighth in the championship in Indy cars. Bryan did win four times, 1998 and 1999 at Laguna Seca in CART, at Kansas in 2003 and Michigan in 2005 in IndyCar.

“I never talked to him on the radio until we were testing wintertime,” Colton said. “It’s been very different. I don’t think he’s ever heard me talk on the radio before. He’s always kind of put me in the best position for people that are very smart to work around me and help me with that.

“I think for most teenagers growing up, the last thing they want to hear is their parents nag them and tell them what to do. I understand that he’s right, but that is the last thing I wanted to hear.”

Herta looks around the Andretti Autosport garages and knows that if he can keep up with teammates Alexander Rossi and Ryan Hunter-Reay, he’ll probably be in the mix for a championship. James Hinchcliff is also nearby in the Andretti-Steinbrenner Autosport wing of the franchise, and Marco Andretti will check in for an Indianapolis 500 effort in May.

“I think the biggest thing is that we pressure each other, put pressure on each other to perform, and we push each other very hard,” Herta said. “Probably I would argue it’s the best driver lineup throughout the whole series. We have four really good drivers. We’ve shown we have really good cars.

“Now just have to capitalize on that. Drivers need to do their job.”