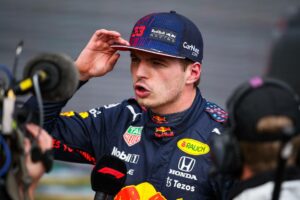 Christijan Albers says Max Verstappen’s grid penalty in Qatar was “all idiocy”, and that’s a “shame” as it affected the championship fight.

Verstappen qualified second fastest behind his title rival Lewis Hamilton at the Losail circuit but lined up P7 after he was hit with a five-place grid penalty.

Verstappen was penalised for ignoring double waved yellow flags even though it did not come up on the track’s boards nor his onboard dash. It was a sole marshal waving those flags for Pierre Gasly’s punctured AlphaTauri.

Team boss Christian Horner was furious with the call, believing a “rogue” marshal had erroneously waved a flag despite no word from Race Control.

He’s not the only one who feels it was unjust.

“Sorry, but I think it’s all idiocy,” former F1 driver turned pundit Albers told De Telegraaf. “What am I supposed to say about it?

“Someone drives on the straight and then you get to see a yellow flag in a qualifying session.

“The problem is, rules are rules.

“You’re busy qualifying and then you have to go to the maximum to drive the best lap time. You’re really focused on that.

I’m either colour blind or that Max is been shown a yellow and green??? And also the no led dash lights indicating a yellow flag on Max Verstappen wheel??? So this cannot be a penalty surely? pic.twitter.com/1wCjOANMwT

“The marshals are the first to see it and they give the signal with the flags.

“Then it comes up to the control room and they pass it on to them on the steering wheel. You have to comply with that.

“But I don’t really find it interesting to talk about it at all, because I think it’s just nonsense.

“It’s qualifying and there was no danger. If there was real danger, I would say ‘yes’ [penalty deserved].”

Although Verstappen’s hearing only took place on the Sunday morning, he told the media he always knew a penalty was coming as he “never get presents from” the stewards.

The Red Bull driver recovered from the penalty to finish second but at no stage of the grand prix was he able to fight Hamilton for the win, the Mercedes driver unchallenged on the day.

The gap between the title protagonists was reduced to eight points in Verstappen’s favour with two races remaining.

Albers added: “I just think it’s a shame because it affects the championship quite a bit.

“We don’t want that actually. We just want a fair fight between Max and Lewis.

“It’s a bummer, but luckily Max did a fantastic job. He had another rocket start. He just did super well.”