Home » Racing » Christian Horner: 'We have to be realistic' | F1 News by PlanetF1

Christian Horner: 'We have to be realistic' | F1 News by PlanetF1 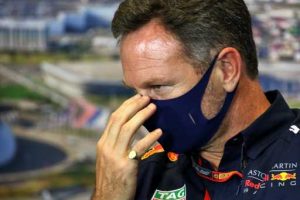 While Christian Horner isn’t giving up on catching Mercedes next year, he says that, realistically, the chance to do so won’t come until 2022.

Red Bull once again hasn’t been able to build a car capable of consistently beating the German team this season, with Max Verstappen constantly having to settle for P3 and hope for issues ahead.

With stable regulations next year, that doesn’t look likely to change, although team principal Horner previously stated that he felt optimistic that the gap could be closed.

“There is a carryover of parts but that doesn’t mean to say if we can unlock more potential in the car and develop the car effectively then, of course, I think we can close that gap,” the team principal said as per gpfans.com.

“This car is the basis of next year’s car. There is probably 60% of the car that is carried over so obviously, we are working very hard to understand and unlock further performance from the car between now and the end of the year.

“There are now three months left of hard development and the whole team is very focused on that.”

However, speaking to the official Formula 1 magazine, the Brit has admitted that while he and Red Bull aren’t giving up on 2021 by any means, due to the new regulations, 2022 is the next realistic opportunity for Mercedes to be caught.

“I think over the winter Mercedes have done a great job and they have made a step forward with their engine,” he said.

“We know they are the benchmark and their chassis is very well-rounded. I think it’s mainly on that side of things that we need to raise the bar. They have set a high target, but nothing is insurmountable.

“The new regulations are going to give us a bigger chance. Next year is essentially an extension of this season, so we are going flat out to develop our car until the end of the year and what we finish with is largely what we’ll start in Melbourne, if that’s the first race.

“We’re not giving up on anything, we’re pushing flat out, but one also has to be realistic with the margin that Mercedes have at the moment. The biggest reset will be how teams interpret the 2022 regs.”