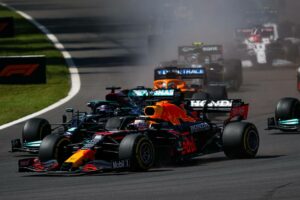 Red Bull boss Christian Horner was not expecting Mercedes to be so generous on track space afforded to Max Verstappen at the Mexican GP start.

Verstappen, starting from P3, was able to pick up a tow from the Mercedes of Valtteri Bottas in front, using that to move alongside the Finn and then outbreak him, as well as title rival Lewis Hamilton into Turn 1 to take the lead.

Mercedes principal Toto Wolff was far from pleased as his drivers “parted the sea” for Verstappen, while Hamilton pointed the finger at Bottas for not closing off Verstappen’s route around the outside.

And even Horner admitted that he was surprised to see the door open wide for his driver, setting him up for a comfortable victory.

“Today has been a massive day, a fantastic drive by Max, the most important part was the start, he nailed the start,” Horner told Sky F1.

“He found himself a bit of space, which I was surprised that they gave him the room, but I have to say Valtteri was very fair.

“And I thought Max had missed his braking because he was so late on the brakes at Turn 1, but he made it stick and from there really controlled the race, it was a very straightforward race for him.”

Asked if he felt Bottas had his eyes on Hamilton at the start instead of Verstappen, Horner replied: “They’ve covered the inside but then obviously there was a knock with the McLaren, I think it was Daniel [Ricciardo] tipped Valtteri, and then Checo [Perez] had to cut the grass there.

“But Max timed it perfectly, he got the tow, made it work, and then was able to control the race beautifully.

“On the reconnaissance lap he went out and he braked right there, so he had almost rehearsed it in his mind I think what he was going to do.”

Wolff said that Red Bull would have won the Mexican Grand Prix even without Verstappen taking the lead at the start, such was the dominance of the Austrian outfit.

That had not been the case in qualifying though, where Mercedes claimed a shock front-row lockout, so on Sunday it was Red Bull who were surprised after such a commanding win.

And as it turned out, Horner felt that Verstappen starting P3 rather than from pole actually proved a blessing in disguise.

“I don’t think we were expecting that after yesterday [in qualifying],” Horner admitted.

“Yesterday was a bit of a surprise, and it felt like we underperformed, but then I think actually it was almost a blessing because I think had we been on the front row, ironically we would have been a sitting duck down to Turn 1.

“So actually ironically it worked out reasonably well for us.”

Shown the wild celebrations that took place in the Red Bull garage as Verstappen took the lead at Turn 1, Horner said it proved how much this title battle means to the team.

Verstappen is now 19 points clear of Hamilton in the Drivers’ standings, while Bottas took the fastest lap away from Verstappen to ensure that Mercedes remain ahead in the Constructors’ by one point.

Verstappen did all he could though to cling on to that bonus point, even cheekily slowing down in a bid to ruin Bottas’ attempt.

“You can see what it means to the whole team, we have worked so hard to get into this position,” said Horner.

“To be one point behind in the Constructors’, four [rounds] to go, to be 19 ahead in the Drivers’ now, there was a bit of messing around over the fastest lap at the end which added to the stress, but Max seemed to enjoy it.”

There was also an appearance on the podium for Red Bull’s design chief Adrian Newey to collect the winning Constructors’ trophy in Mexico, a fitting moment Horner felt, on the 30th anniversary of Newey’s first involvement in an F1 victory.

“Great to see Adrian up there today [on the podium], it is 30 years to his first victory that was here in Mexico with a Williams,” Horner stated.

“So great to see him up there on the podium collecting the Constructors’ trophy.”