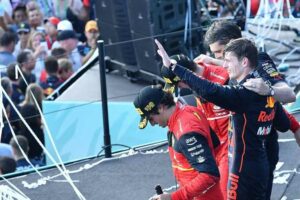 Such is the ebb and flow between Red Bull and Ferrari that Christian Horner reckons this year’s title race could go down to the wire.

Last season, Formula 1 fans were treated to a title-deciding season finale and while it was ultimately more controversial than celebratory, it brought in the numbers as F1 had to wait until the very last lap for the championship to be decided.

This season could have a similar fate, although hopefully without the controversy.

Max Verstappen and Charles Leclerc are going wheel-to-wheel for this year’s title, the Ferrari driver 19 points ahead of the Red Bull man.

Verstappen, though, has momentum on his side having won at Imola and again in Miami after Red Bull’s upgrades for the RB18 gave him the pace advantage.

No weekend is ever easy in F1, especially on a new demanding track like this one 🥵

That’s why I am all the more proud we were able to put it all together in the end, great work team @redbullracing 👏 pic.twitter.com/BrIUJU7n9D

Ferrari are expected to pull it back at the Spanish Grand Prix when they update their F1-75 for the first time this season.

And that development war, balanced against the budget cap, could see the title race go down to the wire.

“There’s a long, long way to go and I think it’s so tight with Ferrari, there’s been some great racing,” said Horner, quoted by Motorsportweek.com.

“There’s a great respect between Charles and Max. They are enjoying racing each other, you can see that.

“I think I was rather hoping we weren’t set for another competitive year like last year, but it looks like this one could go all the way as well.”

Looking ahead to the Barcelona race, the Red Bull team boss acknowledges Red Bull will face a stiff challenge from Ferrari.

Although in Miami the RB18 had the advantage when it came to straight-line speed as well as better pace in the slower corners, the Barcelona circuit is one dominated by high-speed corners.

“It’s been nip and tuck. Barcelona is a whole new challenge, high-speed corners, we know Ferrari are strong in that area,” he said.

“So it’s horses for courses and this circuit (Miami) suited us. We were able to make it work and thankfully get a result.”

Five races into this season, Red Bull trail Ferrari by six points as the Milton Keynes squad chase a first championship double since 2013.