Home » Racing » Christian Horner on Drive to Survive: At the mercy of the producer's script…

Christian Horner on Drive to Survive: At the mercy of the producer's script… 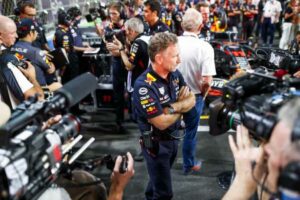 Although Christian Horner concedes that Drive to Survive uses a “creative license”, he feels it has done more good than harm to Formula 1.

Last month, as the cameras began focusing on the new Formula 1 season, Netflix released season four of their acclaimed Drive to Survive series.

However with that came a lot of criticism with reigning World Champion Max Verstappen vocal in his complaints about the docuseries.

The Red Bull driver, who refused to be interviewed for season four, criticised the way in which Lando Norris’ relationship with Daniel Ricciardo, billed as a rivalry was portrayed.

He said: “They try to pick moments throughout the season and fabricate it in a way. For me personally, what I didn’t like was about Lando and Daniel.

“I think they are two great guys, really nice first of all, and they made it look like Lando was a bit of a d*ck, which he isn’t at all.”

But while Horner agrees that the show does use a creative license, teams and drivers portrayed in a manner that best suits Netflix’s narrative, he still feels it has done a lot of good for Formula 1.

New drivers, new rivalries and an all new championship winner. Formula 1: Drive to Survive is back on 11 March! 🏎️🏁 pic.twitter.com/3aSoENJB57

“Inevitably, there’s always a lot more going on, and of course you’re at the mercy of the producer’s script, so I think that there’s a narrative there that you don’t have control of,” he told GQ Magazine.

“They’re making a TV show, but I think that it’s getting behind the scenes, it’s capturing content that the broadcasters aren’t able to get during the coverage of a grand prix weekend.

“So what it gives you is a small insight behind the scenes, and it’s engaging a new audience, a young audience, and bringing more fans to the sport. In America, it’s been hugely successful and that’s massively exciting for Formula 1 in general.

“From a purist’s point of view, you can understand there’s an element of frustration when clips are being added together that perhaps aren’t even from the same event, but again, once you’ve taken that creative license out of it, I think that as a show, as a form of entertainment, its success is undisputed.”

Verstappen’s criticism of how the McLaren drivers were portrayed was not his first dig at the docuseries, the Dutchman previously saying they have “faked a few rivalries which don’t really exist”.

But one rivalry that did exist last season was Red Bull versus Mercedes, and Horner versus Toto Wolff, the latter at times taking over the show such were the verbal spats.

Asked if that rivalry was as ‘heated’ as it looked, Horner insisted: “I think there is respect. I’d like to hope there’s respect, certainly between the drivers and their teams. We have to remember Drive to Survive is ultimately a TV show, so they’re taking snippets and segments.

“But of course it’s a competitive business, it’s hugely competitive – we’re fighting for one of the biggest trophies in sport, and there’s a huge amount involved for big teams. There are always tensions, there are rivalries, and you know, sometimes that boils over.

“It’s important to stay focused on what your goals and objectives are. That’s the crucial thing. Anything else is obviously a distraction. I think that’s the fundamental thing and I think that’s what we managed to do last year.

“That’s how we were the only team in the last eight years that has managed to take on and ultimately beat Mercedes and Lewis. We stuck to our plan, we stuck to our programme, and in the end it paid off.”