Home » Racing » Christian Horner: Mercedes' design concept is the issue, not the rules

Christian Horner: Mercedes' design concept is the issue, not the rules 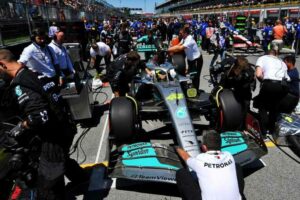 Christian Horner has bluntly told Mercedes that their problem with porpoising is not because of the rules, it’s their interpretation of them.

Mercedes have struggled more than most with bouncing with this year’s all-new cars, prompting Toto Wolff to call on the FIA to tweak the regulations.

But while he insists it is because he is worried about the health of his drivers, Horner reckons it all about performance and right now Mercedes don’t have that.

The W13 with its bouncing is off the pace of Red Bull’s RB18, a car that has hardly any porpoising.

As such Red Bull have raced to seven grands prix wins, Mercedes have yet to finish higher than P3.

Horner says Mercedes problem is not the regulations, it is how they interpreted them.

“The issue with Mercedes is more severe,” he told Motorsport.com, “or certainly has been prior to [Canada] than any other car.

“That surely is down to the team. That’s within their control to deal with that, if it’s not affecting others.

“I know it was said other drivers have been complaining. Our drivers have never complained ever about porpoising. They’ve said certain circuits could do with tidying up, perhaps resurfacing in places.

“But we haven’t had an issue with bouncing. The problem is they’re running their car so stiff. I think their concept is the issue rather than the regulation.”

While this year’s other race winner, Ferrari, went with baby bath sidepods as they have been dubbed with their wide layout, Mercedes opted for extremely slim zero-pods.

Red Bull, although not as wide as Ferrari, have more sidepod structure helping to stabilise the floor than what Mercedes have.

The Brackley squad was given some help with that in Montreal when the FIA announced that the teams could fit a second stay to the floor, Mercedes the only team to trial that on the Friday.

That second stay was in place less than 24 hours after the FIA’s announcement, Horner still perplexed as to the speed of that.

“There is a process of these things to be introduced,” he said. “I think what was particularly disappointing was the second stay.

“It has to be discussed in a technical forum, and that is overtly bias to sorting one team’s problems out – which were the only team that turned up here with it, even in advance of the TD. So work that one out.”

The Red Bull team boss is confident all the teams will eventually find solutions and, until they do, if the FIA feels a car is unsafe, they should black flag it.

“You’ve got some of the brightest engineering talent in the world, and things will converge,” he said.

“I doubt we’ll be sitting here next year talking about the bouncing, even if the regulations are left alone.

“These cars are still relatively new, I think as teams add developments to their cars, you’ll probably start to see them start to address some of these issues. And you can’t just suddenly change technical regulations halfway through a season.