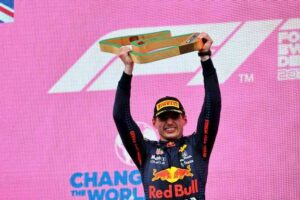 Christian Horner hailed Red Bull’s “most dominant” win of the season as Max Verstappen coasted to victory in the Styrian Grand Prix.

Never has Red Bull’s advantage over Mercedes in 2021 been so marked as it was at the circuit they own in the Austrian hills, where Verstappen gave the team a fourth consecutive victory at the expense of their World Championship rivals.

Verstappen, who started from pole position, was never under any significant threat from the moment he left the grid, and he passed the chequered flag 35 seconds clear of Lewis Hamilton after the World Champion had made a late pit-stop designed to bag the fastest lap.

Hamilton did indeed snatch the one point available for that achievement but now trails Verstappen by 18 in the Drivers’ standings.

Horner, the Red Bull team principal, told the Dutchman to “keep turning the screw” over the team radio on his in-lap and then saluted Verstappen’s “masterclass” as the gap was extended to 40 points over Mercedes in the Constructors’ World Championship.

The margin could have been even bigger had Sergio Perez beaten Valtteri Bottas to third position, but the Mexican was hindered by a 4.8-second pit-stop due to an issue with the left rear tyre.

The first time ever in the turbo hybrid era that Mercedes have lost four in a row.#F1 pic.twitter.com/OqZu6DldcV

“I think the whole team’s just working tremendously well at the moment,” Horner told Sky F1. “The only hiccup we had in that race was the pit-stop for Checo.

“But other than that it was an immaculate performance, particularly by Max who just managed the race so well. He controlled the race fantastically well and it was a masterclass.

“The one stop was the quickest route for him. We could see Lewis’ tyres were starting to open up so we were mindful of that, but the way he controlled the race and built the gap, that was the most dominant win we’ve had so far this year against Mercedes. That’s very encouraging.”

Although Red Bull now find themselves in an increasingly strong position in both championships, Horner is refusing to get carried away with potentially 15 more races to go – the first of which takes place at the same venue next weekend.

“You’ve got to take it one day at a time in this championship,” added Horner, who saw Verstappen win for the third time in the last five races at the Red Bull Ring.

“It’s such a long route and we’ll enjoy today, take the lessons from today and try to apply them next week. It all fell right for us today and we’ve just got to keep this momentum going.”