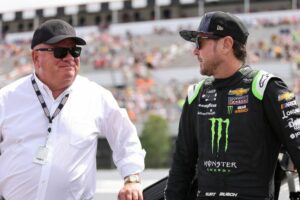 NASCAR Cup Series ownership charters are so valuable that Justin Marks opted to purchase an entire team when seeking two franchises for the 2022 season and beyond.

Trackhouse Racing, which is owned by Marks and pop culture icon Pitbull, has acquired Chip Ganassi Racing’s two-car NASCAR operation. The transaction will become official at the end of this season, and the expanded Trackhouse will then have two ownership charters.

Trackhouse will retain driver Daniel Suarez and pair him with a yet to be determined second driver.

NASCAR charters are the equivalent of franchises in stick-and-ball terminology. Charters permit each team that holds one an entry into all 36 Cup Series events but also guarantees revenue streams through performance-based metrics. In that regard, it’s also similar to the Concorde Agreement in Formula 1.

Since the team’s inception last summer, Marks had frequently cited a goal to eventually own two ownership charters. The charter his No. 99 team has raced with this season was loaned from Spire Motorsports.

That charter must be returned at the end of the year and can only be loaned once per charter period. It was revealed earlier this month that Spire had sold two of its charters to Kaulig Racing.

Trackhouse is only acquiring the Chip Ganassi Racing shop, equipment and charters. The Ganassi IndyCar, IMSA and Extreme E programs are not included in the sale.

With the imminent arrival of NASCAR’s Next Gen car, a single source supplier platform intended to lower the long-term costs of competition, interest in charters has steadily risen over the past 12 months. In a case of supply and demand, the price for acquiring a franchise increased with that interest.

The rumored asking price for a charter has hovered around $10 million per industry speculation. That value could only increase if the Next Gen car proves as valuable as NASCAR wants it to become. Teams that currently have a charter but have placed minimal resources into competition have been able to maximize revenue by selling seats to the highest bidders in advance of purchasing the upfront equipment.

Ganassi first purchased a majority stake in Felix Sebates’ SABCO Motorsports during the 2000 season and operated it alongside his championship winning IndyCar program. The NASCAR team came close to a championship in 2002 with Sterling Marlin and has also won both the Daytona 500 and Brickyard 400 with Jamie McMurray. It has 19 overall Cup Series wins.

In recent years, the NASCAR team’s performance has tapered off and fallen closer to mid-pack with only the sporadic appearance in Victory Lane.