Charles Leclerc warns against adding 'extra pressure ahead of Imola 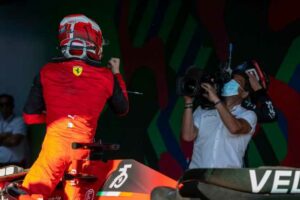 Heading into the first of Ferrari’s two home races leading the championship, Charles Leclerc says Ferrari must not “overdo it” nor put undue pressure on their shoulders.

The last time Ferrari raced at home with one of their drivers on top of the standings was in 2017 when Sebastian Vettel was seven points up on Lewis Hamilton going into the Italian Grand Prix.

He left the Monza race track trailing the Mercedes driver, never regained the lead and finished second in the Drivers’ Championship.

This season there is absolutely no chance of Leclerc not leading the standings after the Imola race, no matter the outcome.

With a 34-point advantage over George Russell, he is guaranteed to be P1 at the end of the Emilia Romagna Grand Prix.

But, having won two of this year’s opening three races, Ferrari’s tifosi are expecting more from Leclerc, they want a win on home soil such as the one he managed in 2019 at Monza.

“Oh, yeah, I can imagine it, but I don’t want to think about it too much because it’s still very early in the season,” he said when asked about the tifosi’s excitement ahead of the Imola race.

“34 points is always good to take wherever you are in the calendar but, yeah, I don’t want to focus too much on the championship for now.

“Italy will be incredible, but we need to approach the race weekend, just like we approached the first three weekends.

“I think it’s extremely important not to put on ourselves extra pressure and not try to overdo things.

“Because we are working, I think, as a team extremely well since the beginning of the season and yeah, we just need to keep doing our job, just like we did in the first three weekends.

This is the first time that Leclerc has ever led the Formula 1 standings, the driver taking 71 points out of a maximum of 78.

And knowing that in his F1-75 he has a car capable of pole positions and race wins, he says that removes a lot of the pressure when racing.

“Obviously, the mindset is a bit different compared to the last two years because now I know that underneath me I’ve got a car that is capable of winning,” he said.

“I don’t really have to overdo things or to do something extremely special and spectacular to actually get one or two positions because I know that it’s in the car and I just have to do the job.

“So the mindset is a little bit different this year.