Home » Racing » Charles Leclerc: W12 did not do all the work for Lewis Hamilton in Sao Paulo GP

Charles Leclerc: W12 did not do all the work for Lewis Hamilton in Sao Paulo GP 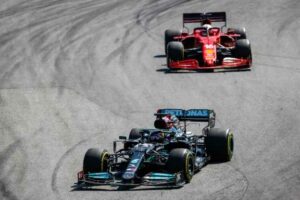 Charles Leclerc does not believe a strong car was the sole reason for Lewis Hamilton’s two stunning comebacks in Brazil.

The seven-time World Champion was quite frankly in a league of his own throughout the race weekend at Interlagos.

In traditional qualifying on Friday, he took P1 with ease; in the sprint on Saturday, he went from P20 to P5 in 24 laps after starting from the back due to a technical infringement; and in the main race on Sunday, he started in P10 after being given a grid penalty for changing his internal combustion engine and went on to win, passing title rival Max Verstappen with 11 laps to go.

Due to having a fresh engine, he had the best car on the grid by quite some margin all weekend, being comfortably quicker than every other driver on the main straight and pulling off numerous overtakes there as a result.

Some people feel that, rather than his driving, the car was the main reason Hamilton did so well in Sao Paulo – but Ferrari’s Leclerc is not among them.

“I don’t agree,” he said when asked for his opinion.

“Obviously Lewis has a very strong car at the moment, but I think he managed to go beyond what that car could give.”

YOU CAN DO ANYTHING YOU PUT YOUR MIND TO! This weekend is proof. We fought this battle on the track and I couldn’t be more proud of @mercedesamgf1 and my incredible teammate @valtteribottas who I couldn’t do this without. EU AMO BRASIL 🇧🇷🇧🇷🇧🇷 We keep fighting, keep pushing. pic.twitter.com/CBD7QbIt1J

Arguments that Hamilton’s success is down mainly to the car rather than his own ability are nothing new in the world of F1, with many feeling having the best machinery throughout the hybrid era is the only reason why he has achieved more than any other driver in the history of the sport.

The other Ferrari driver, Carlos Sainz, is familiar with such arguments and does not understand them, saying it is always a combination of the driver and the car and that both deserve some credit.

“Yes, I saw this debate all over social media today,” said the Spaniard.

“Why don’t we talk about a combination of both? A great driver, an enormously talented driver, with a car that was really dominant this weekend.”

The Mercedes man himself feels his performance at the Sao Paulo Grand Prix was right up there with the best race weekends of his career, while Damon Hill said it was “one of the best drives” he had ever seen and “utterly awesome”.