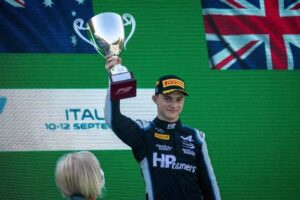 Charles Leclerc would be fully in favour of Oscar Piastri securing the last remaining seat on the Formula 1 grid next year.

Barring anything unforeseen, only one more place is up for grabs in the list of 2022 F1 drivers – at Alfa Romeo alongside Valtteri Bottas.

At present, only Alex Albon will be different to the 20 drivers who have contested this season, returning with a move to Williams as Kimi Raikkonen retires from the Alfa Romeo team amid a game of musical chairs that also involves Mercedes.

Antonio Giovinazzi could, and indeed probably will, join his team-mate Raikkonen in saying goodbye to Formula 1, with a younger driver sliding in next to Bottas.

The leading contenders for that Alfa Romeo seat are the heavily-sponsored Guanyu Zhou and emerging Sauber prodigy Theo Pourchaire. But even though he recently played down his own prospects, there have been reports this week that Piastri could also be in the mix.

The Australian, who won F3 in 2020, has taken like a duck to water to the Formula 2 Championship this year and is in control of the title race with six races remaining in Saudi Arabia and Abu Dhabi.

Many people think Piastri’s results make him a more deserving case for an F1 promotion than Zhou or Pourchaire – and if it did happen, it would certainly sit easily with Leclerc.

“He’s a very, very talented driver,” the Ferrari man told The Race. “I look at all the F2 races and he’s incredibly consistent, always there when he needs to be. It’s impressive and he definitely has the merit to be in F1.

Such a move would mirror exactly what happened to Leclerc, who won the GP3 title in 2016, the Formula 2 crown in 2017 and then drove for Alfa Romeo Sauber in F1 the following year.

But although it would perhaps appear a shade unjust if Piastri missed out on being promoted to a rival he had beaten over a full campaign, Leclerc would not want to see an automatic upgrade to Formula 1 being introduced for an F2 champion.

“It’s a difficult one,” said Leclerc. “I wouldn’t do it as an automatic move, that you win F2 and you go to F1 because this wouldn’t be fair in some cases. But it’s also pretty clear once a driver deserves it.

“It’s Oscar’s first year in F2 and [it looks like] he wins it straight away – that’s been the case for other drivers too.

“I don’t think there needs to be a rule for it. It’s quite obvious some F2 winners need to get a seat.”