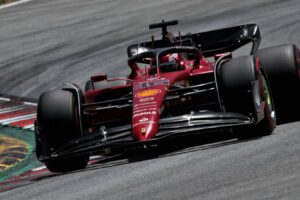 Charles Leclerc admitted the pressure to nail his final flying lap in qualifying made him “a bit scared” that it would go wrong.

The World Championship leader ended up only having one attempt in Q3, having spun at Turn 14 on his first flying lap which scuppered his chances.

With flat-spotted tyres, he quickly darted back to the pits to get himself ready for a final run at Barcelona, and he didn’t put a wheel wrong as he took a commanding pole position by more than three tenths of a second, with title rival Max Verstappen coming in behind, aborting his lap after a DRS failure hampered his final flying run.

While Leclerc dealt well with the pressure of performing with only one chance at success, he said he was feeling it while behind the wheel.

“The session was very difficult, in Q3 I made a mistake in the first attempt,” Leclerc told Sky Italia.

“Obviously then I only had one lap, but it went pretty well. I was a bit scared during the lap, but I managed to do everything perfectly.

There was plenty of drama throughout Saturday, and some fared better than [email protected] looks at the winners and losers from #SpanishGP qualifying…https://t.co/GVpR2rkGdJ

“I am very happy with the pole, the car was fantastic. I’m really happy.”

Getting on the front row in Barcelona is crucial for a driver’s chances of success, given the difficulty drivers face when trying to overtake around the Circuit de Barcelona-Catalunya.

But Red Bull looked in ominous form in Friday practice, particularly during their long-run simulations. With the hot weather predicted to add to the challenges surrounding tyre preservation on Sunday, Leclerc added that race management will be crucial once the lights go out.

“Yes, I am in a strong position at the start. But in the last two races we have struggled with the tyres compared to Red Bull,” he said.

“Max is then immediately behind me. If we don’t manage the tyres well, we will lose the victory. We have to understand the situation well and try to do well tomorrow.”

As for Carlos Sainz in the sister Ferrari, the home hero placed his car third on the grid, which could play into his hands at the start by being on the clean side of the track.

But while the Spaniard ended up more than four tenths behind his team-mate in qualifying, he was relatively happy with how his lap turned out – given the ongoing struggles he faces trying to wrangle the F1-75 to being closer to his liking.

“I made a lap which was more or less what I wanted, which is not easy,” he said. “I’m struggling with this heat and the balance of the car.

“I suffer with the back of the car but I’m trying to change my driving style and the set-up to get there. It’s clear Charles did a great lap, he’s driving very well. But I still have margins for improvement.”